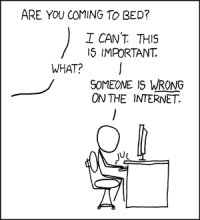 Title text: What do you want me to do? LEAVE? Then they'll keep being wrong!

SIWOTI syndrome is a strange psychological affliction affecting many Internet users that describes the compulsions to post long and time-wasting rebuttals to online nonsense (such as conspiracy theories and pseudosciences), in the vain hope that it will somehow set the record straight. The abbreviation comes from "Someone is wrong on the Internet", a phrase used in the xkcd comic by Randall Munroe, 386: Duty Calls. The syndrome manifests in persistent attempts at convincing people who are (definitely and indisputably) wrong that they are wrong.

Once this syndrome has been triggered, there's not much one can do to stop one from acting on it. They won't let go as long as there is someone WOTI. For this reason, SIWOTI syndrome has been responsible for some of the longest (and also one of the most toxic) threads on social media sites (Yanega, Doug. 2016, DOI:10.1603/ICE.2016.94616).

It is suspected that, analogous to the role of toxoplasmosis in human aggression, the syndrome is the underlying reason for the existence of Internet flame wars, of the organized skeptical movement and rise of online debunking.

While it wasn't in the original strip, the phrase "SIWOTI syndrome" is often used, including by skeptics (Here's an automatically generated list of examples).