A larger version of this image can be found by clicking the image at xkcd.com which can as always be accessed by clicking on the comic number above. It can also be found here: 1000 comics.

This comic is the 1000th comic shown on xkcd containing 1000 characters from previous comics arranged in the shape of the number "1000". Megan is clearly excited as she screams "Woooo!", but Cueball, in true nerd fashion, thinks in base-2, saying that there are just 24 to go until a "big round-number milestone". The joke is that during programming, base-2 is used more often than base-10, making milestones powers of two rather than powers of 10. Where 1000 is a round number in base 10 (103), 1024 is a round number in base 2 (210). Binary is also referenced in the "Connect the Dots" puzzle, explained below.

In the 1000 comic Randall included 404: Not Found, see why in the explanation for this comic. This comic strengthens the fact that Randall did indeed count 404 as a "real" comic.

Each of the characters/drawings is numbered on this page:

About 2/3rds are described on this page:

There is a "Connect the Dots" puzzle hidden within the comic. However, rather than using the conventional decimal system numbering which would start with 1 and count up, 2, 3, 4, 5, ... This "Connect the Dots" puzzle starts with 0 as a programmer would do and counts up in binary numerical order - 0,1,10,11,100,101,110,111,1000,1001 and back to 0. The revealed image forms the shape of a heart. This fits well with the title text where feeling less alone can equate to feeling loved. 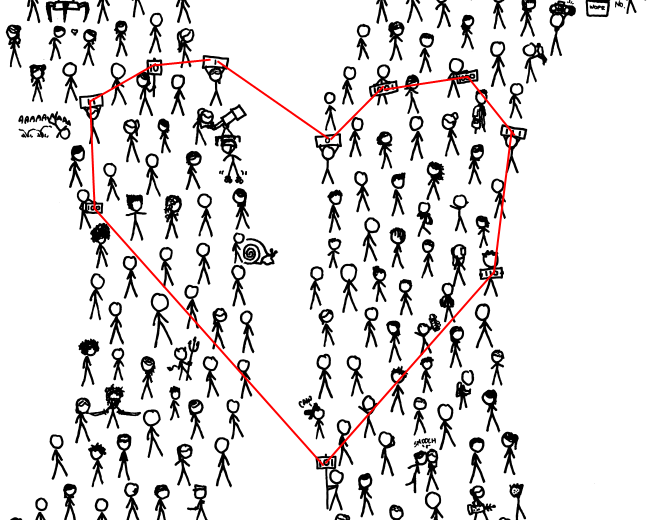 [1000 characters, numerous of which have appeared previously in other comics, are arranged to create the number "1000". Two more people stand in the foreground commenting on the formation. There are several comments amongst these 1000 but here are only written the text that can be read from the small version shown above.]
1000
Megan: Woooo!
Cueball: Wow—Just 24 to go until a big round-number milestone!

In the original Blog format of this website, someone named Phillip had shared the following:

Hint: copy/paste the weird looking text into the text field provided in the above mentioned website. Even after decryption, I couldn't follow what he meant, but I was hoping someone out there can do so and then explain it differently, thanks. It's a real mystery. DelendaEst (talk) 08:47, 22 September 2012 (UTC)

Well about what cueball says another interesting fact is that the number 1024 is used commonly in computer data, 1024 megabytes makes a gigabyte and so on...

And since this discussion 404 has been created on this page as well. -- Kynde (talk) (please sign your comments with ~~~~)

I think we are missing out on this section. I would like to have a separate page for this as we have for other larger comics. And also a separate transcript with the text that can be read on the large picture. --Kynde (talk) 21:24, 9 May 2015 (UTC)

And now it is being created, and categories belonging to this comic is being added. This makes sense comparing with all other large comics explanation pages. It is relevant to know that there are also hamster ball, boomerangs, kites, Richard Stallman and Star Wars lightsabers etc. But it's a huge work and it is not yet complete... To make it possible a numbered image has been created and the table with description of all 1000 characters are in progress. --Kynde (talk) 15:10, 13 August 2016 (UTC)

Following with this wiki's goal of explaining the nuances of the XKCD comics I moved the connect the dots puzzle out of trivia and placed it int the main article. It isn't a spoiler or just trivia, it fits well with the title text and is definitely not something a casual reader would find on the first pass through the comic. Chriswampler (talk) 13:13, 5 May 2014 (UTC)

MIT hackers commemorated 1000 by posting all xkcd comics ever published around Lobby 7, a high traffic entryway near 77 Mass Ave. The comics were attached to both pillars and walls (using easily removable adhesive so as to avoid damaging the walls). http://hacks.mit.edu/Hacks/by_year/2012/xkcd_1000/ Tericee (talk) 20:32, 4 August 2015 (UTC)