Dinosaurs have been a fascinating topic in popular science and have captivated children's interest since the first fossils were discovered in modern times, around the 1700s; prior discoveries in China and elsewhere were thought to be the bones of dragons or other mythical creatures. The success of the Jurassic Park movies perpetuated an erroneous understanding of the physical characteristics of dinosaurs. Since the first movie of that series, scientific evidence has emerged suggesting that Dromaeosauridae, or "raptors", the main antagonists of that movie, looked quite different from their animatronic and CGI versions. In particular, they are now known to have been much smaller, and are believed to have had feathers and even wings, as evidenced by quill nobs observed on the arms of raptors. 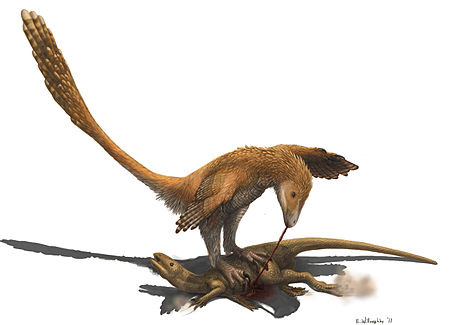 Artist's impression of a "raptor prey restraint" as suggested by Fowler et al. (2011), and described by the child in the comic. (from Wikimedia Commons)

Denver W. Fowler is among the scientists who support this hypothesis. (incidentally, a "Fowler" is a hunter of wildfowl/birds) The comic refers to a publication by him and his colleagues ("et al."), in the PLoS ONE, an online scientific journal ("PLoS" stands for "Public Library of Science").

Megan believes this new model of the appearance of raptors makes them much less cool, but the way in which the child reformulates the facts to make them seem like even more vicious predators re-ignites her interest and makes the new raptors seem like at least as good a candidate for a good action thriller movie like the original version, if not better. Thus the phrase "the past keeps getting cooler".

Clicking on the original cartoon links to a YouTube video of a bird of prey (in this case a Secretarybird) using its wings for stability while standing on top of a struggling prey, from which one can easily envision instead a raptor upon its prey — especially in case of some kind of "raptorphobia", as for Randall (see 87: Velociraptors and 135: Substitute) -- note: this video is now defunct. But you can still access it via wayback machine. Microraptor was a small raptor with four wings, which lets you imagine even scarier scenes.

The same idea is later explored from a different perspective in 1527: Humans.

[Megan is walking up to a child who has a stack of books and is reading one of them on the floor.]
Megan: What are you reading about?
Child: Dinosaurs!
Megan: Oh, yeah.

Megan: They've gotten all weird since when I was a kid.
Megan: They used to be awesome, but now they all have dorky feathers, right?
Child: Yup!

Child: This says they now think raptors used their wings for stability, flapping to stay on top of their prey while hanging on with their hooked claws and eating it alive.
Footnote: *Fowler et. al., PLoS ONE 6(12), 2011

[Megan stands staring at the child.]

[Megan is now on the floor flipping through another book from the pile.]

If anyone wanted to look at it, here's a link to the article mentioned

I think the linked article is the wrong one. First, it was published in 2009, not 2012. And second, it's talking about raptors (eagles), not (veloci)raptors (dinosaurs). Oddly, it is talking about raptors (eagles) restraining prey, so maybe Randal made the mistake? No, the picture's caption clearly references another article. I'm having a hard time tracking it down. 96.43.65.242 21:01, 5 September 2012 (UTC)

Jurassic Park was not incorrect in the size of the raptors; it was incorrect in the *name* of them! The so-called velociraptors in the movie were actually Deinonychus, which did grow to about that size and had the same shape and form as the smaller velociraptor. 108.162.216.87 (talk) (please sign your comments with ~~~~)

I think it's worth mentioning that the last part of the title text "And there's more of it every day!" is a fun way of stating that the history we can study becomes longer and therefore more interesting every day simply because every day another 24 hours is "added" to history. 162.158.90.210 (talk) (please sign your comments with ~~~~)