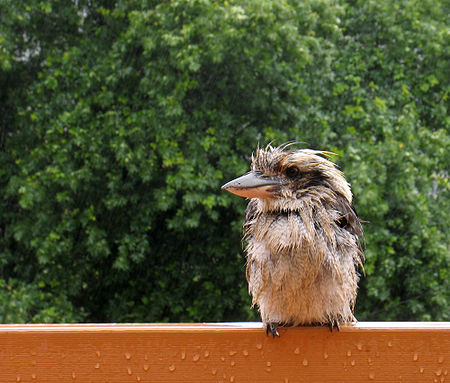 A wet bird sitting in the rain. (from Wikimedia Commons)

Cueball searches Google to find out where birds go when it rains. He finds that the question is asked worldwide, across different languages and websites, and that everyone wants to know the answer. A variety of screenshots are shown of different websites and forums with users asking where birds go when it rains, with at least seven languages shown. The bottom of this panel fades to white, suggesting that the occurrence of these questions stretches on and on.

Cueball says that worrying about birds getting wet is "the thing that unites us"; but the last panel reminds us that birds too, probably worry about it.

In reality birds, just like humans, seek shelter when it rains. Getting wet is not a problem for birds, but it does complicate flying. On a rainy day you can usually find birds in leafy trees, caves or other kinds of cover.

The lower panels turn the question on its head, pointing out that the question "Where do birds go when it rains?" is not just something that curious humans may wonder, but a serious practical question for the birds themselves. As it starts to rain around a bird, it flies down to a smartphone on the ground and begins searching on the query, ostensibly to find instruction as to where it should go. This could also suggest that the reason the question appears posted so many times, is because in actuality it is the birds who are posting it (since there are more birds than humans, this could easily account for the number of posts).

The title text whimsically suggests that birds might actually be an additional undiscovered exotic phase of water (in addition to its familiar phases of ice, vapor, and liquid water, water does have more exotic phases such as low-temperature and high-pressure ices and supercritical gases). If so, birds disappear when it rains because they actually turn into the rain. This is similar to how, in the Superman comics, Clark Kent disappears whenever Superman is around because they are actually the same person.

[The comic is separated into three sections, with Cueball and Megan having a discussion in the first section, websites found through Google search results depicted in the second, and a bird depicted in the third]

[First Section - Cueball is sitting at his computer]

Cueball: "Where do birds go when it rains?" is my new favorite Google search.

Megan [off screen]: Why?

Cueball: It gives the answer, but also shows you an endless torrent of other people asking the same question. Pages and pages of them across regions and cultures.

[Megan enters the frame and shows interest in the computer]

Cueball: I love the idea that somehow this is the universal question, the thing that unites us. When it rains, we wonder where the birds go, and hope they're staying dry.

[from Yahoo! Answers]: Where do the birds go when it rains? I've noticed I rarely see birds flying around or in trees or on power lines when it's raining, So where do they go?

[from Godlike Productions]: Where do birds go when it rains really hard? Ok, maybe I'm an idiot for asking this, but during the slew of several storms in California the last couple weeks, I began to wonder where the poor birds go to stay dry? The ducks, seagulls, owls, sparrows, hummingbirds, hawks, etc...I see them all the ti[...]

[from Random Thoughts From Midlife]: Where do the birds go when it rains?

[from Answers.com]: Where do birds go when it rains?

[from Active Rain]: Where do Birds go When it Rains? I'm no youngster...and I have no answer for this. I've talked to alot of people about the likelihood of where birds go when it rains and everyone has a different perspective.

[from Ask MetaFilter]: Where do the birds go when it rains? BirdFeederFilter: When it's gloomy and rainy, I don't see any birds at my birdfeeder for days on end. Then as soon as it's sunny, they're all over the place. What gives? What do they do on rainy days, just forage near their nest?

[from Snippets]: Where do city birds go when it rains?

Storm shelter In Florida, where I live, we get many thunderstorms, but I never see the birds in trees during the storms. We recently had a tropical storm and I did not see any birds in the trees. Where do birds go when it rains or storms? Just like at night, birds will seek shelter during storms. I remember watching a flock of American robins dive into[...]

[from Yahoo! Answers]: When it is raining heavily, where do the birds go...i don't see them on the trees, where do they take shelter?

[from Yahoo! Answers]: Where do birds go when it rains? I never see any out...?

[from Fairfax Underground]: What do birds do when it rains? Recently I installed a bird feeder outside my bedroom window. It is so wonderful the diversity of our feathered friends that frequent the feeder! I love it. My question that I haven't found an answer to is this: What do the little birdies do when it rains? I mean, do they stay put in the trees that they find themselves in,

[from Yahoo! Answers]: What do the birds do when it RAINS like crazy? I live in upstate new york and just moved here and there are so many many birds here especially where I live, the other day I saw a broken egg on the ground in the drive way from a [...show more link] Update: I know they get wet btw but was wondering if they did anything extra to [...show more link] Best Answer Well ... it depends on the species of bird, for one. Some are more adapted for rain then others.

[Third section - A bird on a wire fence]

[A bird sits on a wire fence with no rain falling]

[The bird flies down to an small smart-phone-shaped object lying on the ground, as the rain increases in intensity even more]

[The bird lands on the object, with puddles increasing in size around the object]

Really, they only have trouble with the newer capacitive touchscreens - the older resistive ones (used in e.g. Palm Pilot) were much easier to use with a beak-- Brettpeirce (talk) 20:08, 15 October 2014 (UTC)

"as Superman & Clark Kent are the same" if you see one you see both not one or the other. As for birds and rain: In Britain, they all tend to roost facing the approaching weather when fronts form that may bring rain. Similarly when the fronts form that look like the rain is ending they will be roosting in good viewpoints to observe whatever is likely to happen next. You will see them on trees, wires, chimneys and aerials all watching the weather. Flocks as flocks, families as families and solitary birds as such.Weatherlawyer (talk) 19:35, 6 January 2015 (UTC)

Cueball assumes it's a question common to all of internet-accessed humans, making it seem like a beautiful thing. In the end, it turns out those are actually helpless birds asking this question worldwide, not people. I'd advise you add a On the internet, nobody knows you're a dog reference. The ice/catcher in the rye connection is far fetched. Judging by the Clark/Superman comparison, Randall suggests that birds turn into the rain as part of the water/ice phases and not hide from it. Because Clark doesn't go when Superman arrives, he turns into Superman. Dulcis (talk) 08:01, 15 October 2014 (UTC)

Actually, I think Clark will end up on bottom of the phone booth. Superman must assume that noone will steal his disguise while he will do the rescuing ... meanwhile, there is lot of water in birds, but also lot of other molecules, so the transformation wouldn't work. -- Hkmaly (talk) 11:08, 15 October 2014 (UTC)

So for the transcript, I'm thinking until the full text in every screen snippet is transcribed and each source result website is identified, it will be technically incomplete - any commentary on this (?) -- Brettpeirce (talk) 12:43, 15 October 2014 (UTC)

While maybe technically incomplete, surely we have to be sensible, and take the decision to omit text which isn't really relevant to the comic. Take the top right screenshot as an exampe, I would argue that the following should be omitted: Top left word??, Search Replies, Previous Page, Next Page, social media share/like text, Username, Text in geen, UserID: 520655, United States.. --Pudder (talk) 14:19, 15 October 2014 (UTC)

Agreed, as I believe I did when creating what is there right now, and as I summarized below at the same time you were writing your reply -- Brettpeirce (talk) 14:31, 15 October 2014 (UTC)

Alright, well, I did for the first 20 screen snippets what I think would be good to do for the remaining ones (find the source site and page, then quote what seems to be the pertinent question and answer text that is visible in the snippet, disregarding usernames, dates, categories and similar meta data). It could probably also be done for at least ten more with a bit more effort, but I don't wanna waste my time if the community just says "WAYY TOO MUCH! DELETE!!") -- Brettpeirce (talk) 14:29, 15 October 2014 (UTC)

I also kind of think that the transcript should have the links to the source sites (since they are screen snippets), while the explanation should have the translations for any non-english text and any needed explanation for differences in cultural context. Regardless, having links to the source sites seems unnecessary to have in BOTH places, but they're links, so... they don't take up any more room, I suppose... -- Brettpeirce (talk) 14:40, 15 October 2014 (UTC)

Great job on the transcript. Personally I like the link to original source as you've done, though perhaps other would disagree. I'm tempted to say it should also be in the explanation, as that is where I assume others would expect that type of information to be. I'm actually quite impressed at what a quality page this is after only a matter of hours, especially given that it isn't the simplest comic. Images, tables, translations, original sources... Beautiful! --Pudder (talk) 15:42, 15 October 2014 (UTC)

welp, I've done all I think I can do - there's one more under the Japanese one that is almost definitely from a Yahoo! Answers site, but I can't make out enough of it to identify it positively, so, its identity might be lost to Randall's archive forever *sniffle* -- Brettpeirce (talk) 11:34, 16 October 2014 (UTC)

I love how this comic will inevitably increase the internet searches and queries for "Where do birds go when it rains." If this weren't the question that united us before, it certainly is now. XKCD making a difference!108.162.219.206 18:24, 15 October 2014 (UTC)

Not only will it increase the searches, but since it has a transcription of all of the other searches, it's the top result on Google today, too! -- Brettpeirce (talk) 11:34, 16 October 2014 (UTC)

The pale posting near the bottom that begins "Burung Dapat Bertahan...Hujan ?" is either Malay or Indonesian and means something like "Can birds survive...rain?" Taibhse (talk) 23:23, 15 October 2014 (UTC)

The non-capitalization of the German nouns in the given example is perhaps caused by the input device. I can never write proper German on my Nokia cell phone, for example, as it only capitalizes after a period/full stop. Gearoid (talk) 10:57, 16 October 2014 (UTC)

On some phones it is indeed a pain in the ass to capitalize mid-sentence words (as on mine), but I'm not aware of any where it's impossible to do so. Based upon that assumption it has to be classified as "laziness", I think. And as Gearoid said: "it" capitalizes. I'm quite sure you could do it manually by yourself in some way or another.141.101.64.65 12:17, 16 October 2014 (UTC)

Has anyone seen a bird in rain? Show pic please! -- SilverMagpie (talk) (please sign your comments with ~~~~)