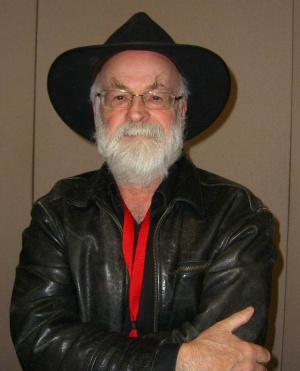 This comic is a tribute to the late Sir Terry Pratchett. It came out the day after the renowned fantasy author died.

The comic quotes a (slightly abridged) passage from Wings, one of the three books of The Bromeliad Trilogy (also known as The Nome Trilogy), a series of children's books by Sir Terry.

During the first five panels of the comic Cueball reads the quoted passage in his book Wings. This passage describes what Masklin thinks about when he told Grimma that they "were going to get married, and all she could talk about was frogs." He then recounts what she told him about a type of tree frog that are found in bromeliad flowers where they lay their eggs, which hatch into tadpoles, and then live most of their lives in a single plant. See a description of this plot point when it happened in Diggers. She—amongst other things—muses about the fact that they are blind to the rest of the Universe, and that most people are blind to them.

After reading this Cueball puts the book down and walks off, and soon finds that he himself has been living at the bottom of a flower much like the frogs in the bromeliad. This is an allegory for a common praise of the best fantasy and science-fiction writing: That by reflecting our own world in a different context, it allows us to better see ourselves. In the allegory, Cueball's journey to the edge of the leaf is a representation of broadening one's horizons, perhaps even in ways that are somewhat frightening.

On a more literal level, the concept of living on a flat surface with a precipice at the edge is explored at length in the Discworld series, Pratchett's most iconic work. Both this series (wanting to own it all) and the space all of Terry Pratchett's books would take up on a bookshelf are the subject of 625: Collections.

The title text continues, more directly, the point previously made allegorically. It thanks the late Sir Terry, noting that his fictional worlds allowed us to better see the real world. "How big our world is" also ties into another point raised in the quoted passage, that there are countless amazing things happening around us all the time without our knowledge.

Terry Pratchett was also referenced in panel 18 of 1052: Every Major's Terrible.

I told her we were going to get married, and all she could talk about was frogs.
She said there's these hills where it's hot and rains all the time, and in the rainforests there are these very tall trees and right in the top branches
of the trees there are these like great big flowers called... bromeliads, I think, and water gets into the flowers and makes little pools and there's a
type of frog that lays eggs in the pools and tadpoles hatch, and grow into new frogs and these little frogs live their whole lives in the flowers right
at the top of the trees and don't even know about the ground, and once you know the world is full of things like that, your life is never the same.

[Below are four more panels. Cueball stops reading in the book. Leaves the book and begins to walk. Walks out on a leaf from a big flower. Finally, zooming in on him at the edge of the leaf, he looks down and sees what is below the flower.]

It is so sad. He was ill with early onset Alzheimer's the last eight years, and he still continued to write about a new book each year, and also four in the The Long Earth series together with Stephen Baxter. I have read almost all his books, only waiting for the latest books to come out in paper back. His Discworld series is monumental, and almost all of the 40 books are worth reading, and most of the times the series just got better and better from book to book. Might just begin reading them all again, once I have gotten hold of and read the last published book Raising Steam. (One last(?) book will be out in the fall, as will the last of the Long Earth series. But here another author are there to finish any loose ends). You will be missed, and thanks to Randall for making this comic. RIP. --Kynde (talk) 10:23, 13 March 2015 (UTC)

There was a comic that included a speculation on how much shelf space to leave for Terry Pratchett books, but I can't remember which one. Can anyone else remember and add a link? Jasqm (talk) 13:44, 13 March 2015 (UTC)

Not sure if it has been mentioned, but there is an optical illusion in this strip; the corners between frames look like they have dark circles in them. Kirdneh (talk) 15:28, 13 March 2015 (UTC)

The thing about Terry Pratchett's books, especially his Discworld series, is that you don't know how much you've read until you look at the series as a whole. I mean, I've *only* read all the Rincewind books, the City Watch books, most of the Weatherwax witch books, a couple of the one-shots, the Moist von Lipwig books, the Death books, etc. You don't realize how far you've come until you stop and turn around to look at where you've been. RIP Sir Terry Pratchett.--108.162.216.80 15:32, 13 March 2015 (UTC)

On another level, Cueball walking to the edge of the leaf and pausing allows us to ponder the next (unseen) panel. Does Cueball return to the relative safety of his flower, the only life he has known, or does he leap off the leaf in a bold move into a new world, new challenges, and new adventures? 108.162.216.191 12:18, 14 March 2015 (UTC)

The Bromeliad Trilogy was a great series of books from a great author, and one of my favorite symbolic moments is after most of the characters have left Earth, and turn to see the planet eclipsing the sun and looking "for all the world, like a flower". -Pennpenn 108.162.250.155 02:37, 16 March 2015 (UTC)

Terry Pratchett plays the pronoun game in the quoted text "once you know the world is full of things like that, your life is never the same." Are we never the same after learning about the bromeliad frogs, or about the ground? For Cueball, and us the readers, it is clearly the ground. -Drake Aedus 141.101.106.83 09:27, 1 April 2015 (UTC)