This was the eighth April fools' comic released by Randall. The previous fools comic was not from the year before as there was no such comic released in 2017. Instead the previous one was 1663: Garden, scheduled for released Friday April 1st 2016, but in the end released on Monday April 4th 2016.

It will thus be interesting to see if 2019 will be year with or without an April Fools' Day comic. It falls on a Monday so on a scheduled release day. However, this does not necessarily mean anything, because this year Randall once again moved the release day, from Monday April 2nd to Sunday April 1st. This comic thus replaced the Monday release, the second time this happens due to April 1st, last time was back in 2012 with 1037: Umwelt, the first time Randall made such comics in consecutive years. That streak ended after 6 comics in 2017, but a new streak may have started now.

At first the comic seems like the most simplistic xkcd comic possible - Cueball standing and doing nothing. The "editor's note" tells you to save a copy of the image to "view the full comic".

To save an image from a browser most people would right click on it (or long click in mobile devices) which normally leads to a "context menu" allowing several actions related to the image, including saving/downloading. This is what you are encouraged to do by the editorial note as well as by the comic name and title text. However the context menu opened is not the default context menu of the browser but an elaborate context menu containing many nonsensical options.

At first it also seems impossible to save the image using that menu. However after exploring the context menu you can find an "easter egg" in one of two different places (see below) which unlocks the save option. This save option gives you a different image than the one you see, which can be thought of as "the full comic" although the meat of the comic is actually in the interactive context menu itself. Note that "cheating" by disabling JavaScript and other methods that allow you to directly save the image won't get you that "full comic" image.

This comic pokes fun at how hard it can be to save an image or to just navigate context menus in some computer programs. The "easter egg hunt" might be related to the fact the comic was released during easter (which fell on April fool's in 2018). It might also be related to the movie "Ready Player One" which was recently released when the comic was released. In the movie, based on the book by Cline, finding an "easter egg" in a VR world was a central plot point.

The title is reminiscent of one of the first interactive comics 1110: Click and Drag, where the title explains what the user should do to experience it. However, that was not a fools' day comic!

The comic uses JavaScript and HTML5 to override the standard context menu. Since modern browsers use the same features to integrate Add-ons into that menu, the behavior may be different depending on the browser environment. Browsers with JavaScript disabled, either totally or by using NoScript, won't access the functionality of the comic, but of course can easily save the image (not "the full version" but the image that is seen initialy).

The manipulated context menu is described below.

[Caption below the frame:]
Editor's Note: Today's comic is optimized for local viewing. To see the full version, just save a copy of the image! 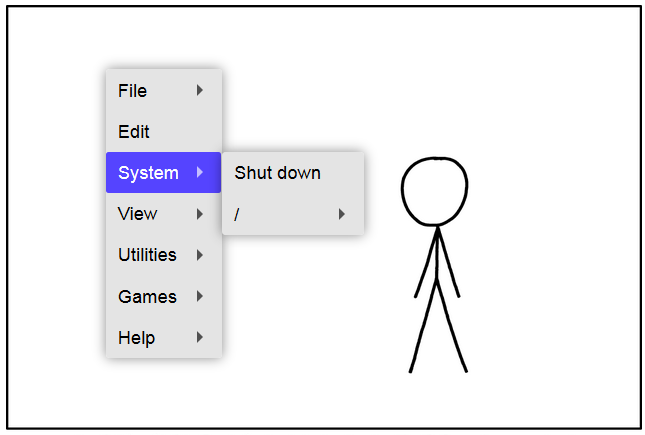 Has this stopped working for anyone else? I just went to the comic today and the right click menu that showed up was the normal one, rather than the altered one. Is this happening with anyone else? DanTheTransManWithoutAPlan (talk) 15:44, 26 September 2019 (UTC)

I have no idea. Maybe Randall has just stopped them - but that would be really annoying because they are still really cool. Biran4454 17:57, 4 November 2019 (UTC)

Sorry if this has been found already, but I'm going to post it since I haven't seen it anywhere in here. If you input the konami code into https://uni.xkcd.com/ weird stuff happens. First time around, it puts all the letters in caps. Second time, it doesn't seem to do anything? Next, text gets highlighted in red. Another and the screen starts shaking. Another; the screen sort of flashes and a character with a beard holding two katanas/machetes with XK CD surrounding it appears faintly in the background. I've done the code maybe 20 more times and nothing else seems to happen. Tidepool (talk) 21:47, 24 May 2018 (UTC)Tidepool

Also, notably, while the comic at xkcd.com works as intended (even from Chrome on Android, to a certain degree), the mobile site, m.xkcd.com, does not. It shows the standard system/browser-specific context menu. --Videblu (talk) 00:28, 2 April 2018 (UTC)

Untrue; going to m.xkcd.com on my Android devices brings up a non-interactive version of the comic, whereas going to xkcd.com (without setting the browser to present a Desktop client type) works fine. Viewing https://xkcd.com/1975 on mobile works fine for me; viewing https://m.xkcd.com/1975 does not work properly. I'm on Kit-Kat & Marshmallow, using the standard browsers; you? ProphetZarquon (talk) 16:04, 2 April 2018 (UTC)

You are right. I don't remember what I've tested before. It cannot work because the embedded JavaScript file doesn't exist. Maybe this will be fixed in the future. --Dgbrt (talk) 17:46, 2 April 2018 (UTC)

Captchas only appear for guests and young accounts. I haven't seen one since roughly the day after I signed up, LOL! (I commented a lot my first day, "taking" ownership of all my previous anonymous comments) NiceGuy1 (talk) 04:44, 3 April 2018 (UTC)

Sorry if this is already well known, but there are a couple unlisted commands, e.g. you can delete things individually using rm -rf. It looks like auto-completion and * don't work. Power Factor (talk) 03:27, 2 April 2018 (UTC)

Reluctant to call it an Easter Egg, but Utilities / Identify Song / Hey Now / Hey now na now / Sing "This Corrosion" to me inverts the colours on the comic/background Maslink (talk) 02:02, 2 April 2018 (UTC)

COMIC MAY BE UNDER CONSTRUCTION I think one of the menu options change since the comic was first posted. Randall may still be changing things. --Videblu (talk) 01:15, 2 April 2018 (UTC)

I agree. It's not just that menu items unlock. On a fresh refresh of the comic, items are there that weren't there before, such as file > find > who what etc., some that had been greyed out are no longer grey.
Actually it's that once you do some things others "unlock". For instance, accessing File > Open > A:\ > Insert > Floppy disk, and then File > Open > A:\ you get the Games, Music, and the really cool Bookmarks catalog of comics. Also, as said above, completing the game ADVENT.exe lets you go to save:

Ah - I don't recall it being different, but I may have missed an earlier version. Anyway here is another way to make the image available:

https://en.wikipedia.org/wiki/Mornington_Crescent_(game) Mornington Crescent is a joke nonsensical game from an old British radio show. 141.101.98.142 (talk) (please sign your comments with ~~~~)

You actually can install apt with brew. It can't actually install anything because it needs to create a package record during the initial operating system install, but you can do it if you want to. Not sure why you would though. EDIT: I can't find the package anymore, but I am pretty sure I was able to do this at one point. Might have been removed due to uselessness. 172.68.34.64 00:08, 3 April 2018 (UTC)

If you quickly right click on the comic after refreshing the page, it is possible to save the comic. Unfortunately there is no easter egg for doing so. Baquea (talk) 12:26, 2 April 2018 (UTC)

spell list (half of it, i didnt test spells with material components): --norill

Recursive package managers are perfectly sane if the two package managers use different repositories, for example apt install python3-pip. The true hilarity arrives if you install a package manager for the sole purpose of installing another, or if they use the same repositories. But that's not unheard of either: apt install npm && npm install yarn -78.68.24.134 but your site thinks I'm 162.158.134.130 16:42, 2 April 2018 (UTC)

Surprisingly, when you are playing 20 questions and get into the section with the animals, all of the image requests go to Bing.

I'm curious if anyone will look at the traffic of Bing and compare the normal traffic with the traffic from this comic. I want to see just how much of a spike Bing image search gets from this.

Is there a reason why UniXKCD is under comic 721? Also, there are significant things missing from it, especially the special ctrl- functions! ChunyangD (talk) 02:56, 3 April 2018 (UTC)

Yeah, that's been my experience. I remember for Umwelt I got what looked like a black hole, which I think might have been the titular Umwelt. I seem to recall the description identified that as being some obscure set up I've never heard of, LOL! I also remember Garden didnt even do anything on my computer! I could change the lights, but that was it. I can't remember Externalities and Lorenz by name. But since my iPad CAN save images I hoped this would be different. Like saving it would, as promised, save a different comic (like Umwelt showed a different comic depending on your set up and connection). *sigh* NiceGuy1 (talk) 04:28, 6 April 2018 (UTC)
EDIT: Checking now, can't remember seeing Externalities, I've certainly never tried it on a computer (I think I just dismissed it as "Oh well" and moved on). Lorenz I did indeed try it a bit on a computer. Hoverboard I went literally everywhere reachable, LOL! NiceGuy1 (talk) 04:34, 6 April 2018 (UTC)

This is what the whole network of menus looks like, minus the massive Comics tree. The big cluster near the center is the DnD game, and the single-file trail on the left is Who's on First. Blue circles are menus, red are links, purple are client-side JS calls, pinks are null (they just collapse the menu), and yellows are "tags" - client-side state variables that are set or unset by some menu options. The orphaned pair of grey dots at the top are the Save menu, which is only visible when a tag is set by the ADVENT.EXE or Mornington Crescent games. I'll try to make this some kind of interactive graph that people can explore - the actual DB I made contains more data than is visible in the image. Okofish (talk) 15:27, 3 April 2018 (UTC)

Where is the javascript source?

Where is the source file for this comic? I had trouble figuring out what was happening from opening my browser console. I can usually figure out things like e.g. kittens game, etc. Which file has the source for the right click menu in this comic? 108.162.210.130 17:41, 3 April 2018 (UTC)

It's here, but the interesting stuff happens server-side. You'll get more info by looking at the network tab in your browser's developer tools. Okofish (talk) 19:03, 3 April 2018 (UTC)

Sooooo just FYI, any similarities to Ready Player One are 100% unintentional. (I can't speak for Randall but I worked on that bit and I haven't read/seen it.) It was just an Easter egg unlock because it was... literally Easter. And we put it there and in Mornington Crescent as the longest/most complicated paths. Apparently if you throw enough 80s/90s nerd references at the wall now, you get Ready Player One. ¯\_(ツ)_/¯ 172.68.141.232 18:46, 5 April 2018 (UTC)