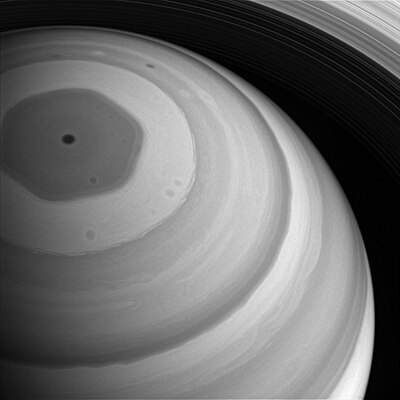 Saturn's Hexagon is a cloud formation on Saturn centered on its north pole. Similar to Jupiter's Great Red Spot, Saturn's Hexagon has proven a persistent feature observed by multiple space probes. The cause was not known until recently, when data from the 2006-2009 Cassini–Huygens probe could be analyzed in depth. This finding was widely publicized in popular science media (see for example [1]) and is related to how currents flow deep within Saturn's atmosphere.

Randall proposes an alternate explanation: it is the top of a soccer ball. Soccer balls are made in the shape of a truncated icosahedron, where faces alternate between regular hexagons and regular pentagons to achieve a more uniform roll. This design was introduced in 1968 as the Adidas Telstar, and is now considered the "traditional" soccer ball. The article is shown to refer to this as the "BSBIT model", a technical-sounding acronym from "Big Soccer Ball In There".

"Soccer" is the name used in the United States for association football, a game called simply "football" in much of the world. Similarly, the US makes wide use of customary units of measurement (inches, feet, miles, pounds, etc.) where much of the world uses the SI or metric system (centimetres, metres, kilometres, kilograms, etc.), so "football" is jokingly referred to in the title text as the SI name for "soccer". As much of the Web panders to a significantly US-based audience[citation needed], many sites use only American customary measurements and omit metric equivalents, which might annoy non-US users; Randall parodies this by sarcastically and non-seriously apologizing.[citation needed]. Just as the American customary units derive from British Imperial units, the term "soccer" originated in the UK, originally to distinguish it from rugby football (sometimes "rugger"), before soccer became the most common form of football there.

This comic may also reference something often quoted to students decades ago that Saturn would float if there were a large enough pool of water to hold it, often having been stated as "Saturn is a giant beach ball". This refers to the property that Saturn is the planet with the lowest average density. This, of course, is a lot more complicated in reality.

Incidentally, the presentation of the truncated-icosahedral 'football', pressing one clear polygonal face up along the upper limit of the planetary sphere, has much in common with the (non-truncated) icosahedron that floats within a Magic 8-Ball, arranged to display just one random triangular face whenever its viewing window is upwards. This may be coincidence, without any obvious attempt to directly reference any of the popular memes relating to this. Randall has previously parodied the magic 8-ball in 1525: Emojic 8 Ball.

[Cueball is presenting in front of a poster, which he is pointing at with a stick.]

Cueball: We're proud to announce that our team has finally determined the origin and nature of Saturn's polar hexagon.

[The poster represents Saturn and its ring-system. There is a massive football/soccer ball drawn as if inside the semi-transparent planet, taking up slightly less than half of it by volume. One of the ball's hexagons coincides with Saturn's polar hexagon, and is labelled "Hexagon". Other labels are illegible.
The poster's title is "There's a Big Soccer Ball In There". The rest of the poster is illegible, except for a section heading that reads "BSBIT Model".]

Interesting, I wrote a basic description since the page was blank, and apparently, within the time I was writing someone else posted an explanation so mine wasn't saved. It's interesting that that's how the site deals with things like that. In this case, the explanation the other guy wrote is better so it's fine, but what if you wrote something super long and detailed and it vanished because someone else was editing at the same time? It didn't appear in the version history so it's not like I could go back and retrieve the text. Again, it doesn't matter here but it's interesting to think about. Zman350x (talk) 02:23, 9 September 2021 (UTC)

I suspect the lack of a merge opportunity has something to do with the fact that the page was blank before the two edits, although I can't say that with any definitive expertise. Ianrbibtitlht (talk) 14:23, 9 September 2021 (UTC)

Maybe, because usually I get an opportunity to review my text compared with the new. And thus do not loose what I just wrote. So could be if the page was completely blank? Or just a browser issue? --Kynde (talk) 08:26, 10 September 2021 (UTC)

I have noted that *possibly* when adding new material to a section when another new section is added within an edit that includes that sectionn(never quite established the true circumstances) the backend is happy to allow 'compound changes' that normally would be blocked (even if it's simultaneous edits to different paras that needn't be considered as a clash).
Possibly (assuming it didn't include very improbable personal editing errors) I've also seen a non-clash clash actually duplicate a paragraph, perhaps where it is positionally dislocated due to inserted paragraph 'objects' above.
(But I don't entirely know how the engine stores and shuffles its comparable input data. It does reveal some of its possible mechanics when you see in edit-comparisons a 'minor' edit, for human glance, as entire original paras 'deleted' from the left and entire barely/rarely changed paras - save for some single-punctuation correction or two, perhaps) 'created' on the right. But at other times it 'deletes'/'creates' at the word-level for similar punctuation changes, or just does the comma!! In ways I haven't yet resolved into any great codifiable insight (nor sought out the source code to analyse). But it keeps me entertained to think about it, as the occasion arises. :) ) 162.158.155.205 09:03, 10 September 2021 (UTC)

So soccer balls appear in the very tiny (Fullerenes) and the very large, as noted here. I wonder if there is a relation, or if the chemists and astronomers are referencing the same group of sports-enthusiast mathematicians. Nutster (talk) 03:20, 9 September 2021 (UTC)

Just to note (in case anyone wonders why one particular edit, in passing) that the only SI length unit is the metre (and, yes, with the French-inspired '-re' ending in all 'English' nations except the US, who don't even want to use it so can't complain (/jk!)). Millimetres, centimetres, kilometres, etc are only present in the broader 'decimalised' metric system using the SI-prefixes. Just as the litre (ditto on spelling!) is not SI, but also is not SI-unit in size, being 1000 of the SI-derived baseline 'cubic centimetres' (each also being 1 millilitre), rather than anything as logical as being 1 whole cubic decimetre or awkward as a "milli-(cubic metre)". 172.70.35.70 04:16, 9 September 2021 (UTC)

Oh, it's probably not a matter of life and death. It's much more important than that! (Wait until someone brings up Rugby League and Rugby Union, and which distinction is better. - Though of course both are much more dynamic than the stateside 'handegg' where everyone is slowed down by padding and frequent stoppages. ;P )
...seriously, there could be more depth to the Magic 8-Ball bit, but the rest of the non-ballgame/metric stuff just mostly writes what the comic says. Unless someone has something to say about what might (or might not) be in the depths of Saturn, IRL, e.g. the core, and how it/Jupiter became the way they did. 172.70.134.137 13:20, 9 September 2021 (UTC)

//However, BSBIT also stands for Bachelor of Science in Business Information Technology [2], a relatively new specialization where business majors learn programming techniques [3], so the acronym could also have been used to imply that a graduate of this major came up with the soccer ball model listed in the presentation.//

No. No, it could not have be used to mean that, because that's completely absurd. Does anyone here actually think that BSBIT was intended this way? Even if you were the person who invented the "Bachelor of Science in Business Information Technology," I guarantee you would not have interpreted Randall to have been using this particular abbreviation in this incredibly contrived and obscure way. As far as I'm concerned, it is 100% certain that "BSBIT" refers to "Big Soccer Ball In There" and absolutely nothing else. The idea that we need to find alternate interpretations of everything, no matter how unlikely it is that anyone will see them that way, and present them as equally plausible as what everyone knows is the intended interpretation, is getting ridiculous. My guess is that someone plugged "BSBIT" into an acronym finder, found this particular acronym, and decided to put it in - possibly thinking it was actually helpful, or possibly just for grins. And sure, maybe we can have something in a separate "trivia" section, but in my view, it's just silly to put it in the main explanation. mezimm 172.69.71.61 20:13, 10 September 2021 (UTC)

The paragraph beginning “The UK is a partial holdout...” is long, and while presumably factual, to my mind the entire paragraph is completely irrelevant to the comic, and should thus be completely deleted. But I’ll let someone else make the final decision on that. 172.69.34.87 23:06, 10 September 2021 (UTC)

Agreed, the whole thing was a long and unnecessary digression - the joke Randall is making has nothing to do with the (rapidly declining) use of "Imperial" units in the UK, and everything to do with the (very much current) use of "customary" units in the US. I've trimmed out most of that paragraph, and left in a brief observation that both the units used in the US and the word "soccer" were originally imported from the UK. - IMSoP (talk) 13:34, 11 September 2021 (UTC)