417: The Man Who Fell Sideways 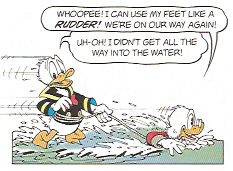 This comic is humorously built-up like a short drama story, about a man with an unusual physics condition.

It might have been inspired by the Uncle Scrooge adventure comic "A Matter of Some Gravity" (Inducks) by Don Rosa, in which Magica de Spell makes gravity pull sideways at Scrooge McDuck and Donald Duck. The same topic is covered by 1996 graphic novel L'enfant penchée (The Leaning Child), but, as it was only published in English in 2014, it’s very unlikely to be a source of inspiration for this comic.

"Soon to be a major motion picture" in the title text might refer to The Curious Case of Benjamin Button, a film released later in 2008 (and based on a short story), in which the protagonist Benjamin suffers of the impossible condition of aging backwards.

"Over land... and sea" might be from the song "Nature Boy" by eden ahbez. Nat King Cole sung (the most famous version) about "A very strange, enchanted boy. They say he wandered very far, very far over land and sea."

The title text mentions Jeph Jacques, who runs the webcomic Questionable Content. Jeph has also described the creation of this comic in his blog while working at ezplay company.

When Cueball hits Megan, he knocks her down and "knocks her up", in what is probably intended to be a visual form of antanaclasis. Megan tells Hairy about a person knocking her over and tumbling into the distance. She hints that she is falling for him, which is a joke regarding Cueball's condition.

The baby shares his tendency to be pulled sideways by gravity, but this apparently does not start until she is born, because Megan and the doctor do not seem to have been expecting it. If gravity had affected the unborn fetus in the same way, Megan would have been able to feel it, would have noticed that her uterus was hanging differently, and would have had difficulty balancing due to the sideways forces.

The last panel is a reference to the opening scene of The Lion King, called 'The Circle Of Life'.

The first part of the comic has some resemblance to this much later comic: 1376: Jump.

There is a fan made animated version of this comic.

I feel like the child should fall at a shallower angle from horizontal. There must be some way to do a punnet square for these things... BruceJohnJennerLawso (talk) 22:47, 8 November 2013 (UTC)

The "when he was restrained, it grew erratic" seems to imply that gravity always pulls him horizontally to the surface he's on. Otherwise, he would be able to stand on a wall, instead of bouncing around. This is one weird kind of gravity.108.162.219.7 20:10, 26 February 2014 (UTC)

"He found, where he could, food and love" - that sounds entirely intentional. Also, considering this entire website is set up to discuss and analyse XKCD comics, saying "we should not read too much into the comic" when the subject of rape arises is pretty shocking.108.162.250.210 11:52, 2 August 2014 (UTC)

The transcript of this comic says that Cueball is under the water for three of the four "water" panels. However, based on the wave visible in the first two panels, the splashes caused by his feet in the third panel, and the lack of a wake in the fourth panel, I believe that Cueball is sliding across the water on his feet, instead of being submerged most of the time.Codefreak5 (talk) 16:57, 15 July 2014 (UTC)