Difference between revisions of "1085: ContextBot" 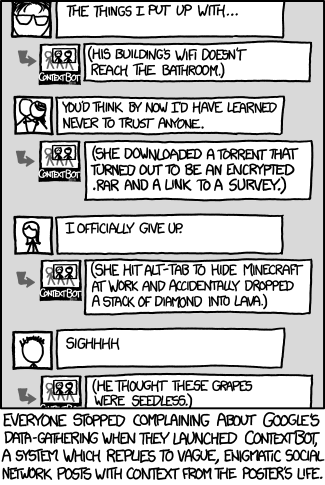 If you read all vaguebooking/vaguetweeting with the assumption that they're saying everything they can without revealing classified military information, the internet gets way more exciting.

Ok, back to the comic, this is a fictitious Google invention (which needs to be invented) which puts random context for these statuses. The second context is about a torrent file which is a way to download large files from a lot of different sources, thereby speeding up the process, it is used for large files such as movies or Linux software distributions. And the 3rd one is about an xkcd favorite, Minecraft, which you can see has been used previously in xkcd comics. Diamond is the most valuable resource in the game, and if you drop it into the lava it is destroyed.