Difference between revisions of "739: Malamanteau" 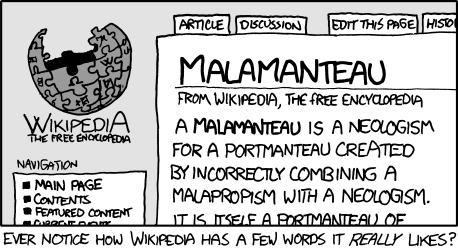 The article has twenty-three citations, one of which is an obscure manuscript from the 1490s and the other twenty-two are arguments on LanguageLog.

Malamanteau when in language, someone combines two words to create another different word. Perhaps, the most famous example of this is "misunderestimate" which was used by former US President George W. Bush.

However, "misunderestimate" might be more of a malapropism as it references in the comic because it was said as a mistake rather than a purposeful combination of two words. At least I hope it was a mistake...

Neologism is also defined as a new word that is created by combining two different words.

However, the word Malamanteau is itself a malamanteau because it is the combination of malapropism and portmanteau it is a neologism and a portmanteau. Which points then to the extreme confusion in the supposed Wikipedia article that this comic is showing.

I hope I made that more clear than more murky for you.

UPDATED: Probably more murky... There is some good discussion in the comments from people who know more about language than I ever will.