I've checked the network tab and console - nothing really seems to happen when you vote, which may be something we want to put on the explanation tomorrow - Myxoh

@Nosajimiki: psychological profiles of xkcd fans. That might be some interesting marketing. - 5Cincinatus

@Myxoh: I came here to see if anyone else had noticed this! But, I do also see a websocket connection to emojidome.xkcd.com, I bet it's counting votes that way.

There is a websocket connection. A message is sent every time you vote. It looks like there are also status update messages every second (saying which emoji currently has exactly how many votes, i suspect this changes the amount of hearts that show up), and "bracket start" messages every so often. The bracket start message seems to contain hundreds of upcoming emoji pairs. Edit: a bracket start is sent at the start of every match (so every ~30 seconds). It also contains logs of which messages to show for previous matches, and which emoji are currently battling.172.69.138.10 16:30, 1 April 2019 (UTC)

There seems to be nothing stopping me from clicking multiple times. Do you think it actually counts it all those times? Can I click-spam to say "this is much better"? Fabian42 (talk) 16:48, 1 April 2019 (UTC)

While some of the recaps of past battles are generic (taco vs sandwich: "One for the history books"), many seem to be specifically written for the battle (light bulb vs candle: "Some would argue that this one was settled in the 1800s"). I wonder if/how much this will continue into round 2.

It's just over 1:15/round from the history JSON (plus some hundredths of a second, but it appears 1:15 is the intent)

And while the match-ups winners are typically colored, and underlined, the losers are endgame grey.

Has anyone determined if multiple-voting is actually counted? For me at least the vote button fades back to gray after I click it, which implies you can/should click it again, but that may not actually be processed. We might add a clarification about that to the explanation. - jerodast (talk) 19:01, 1 April 2019 (UTC)

A reddit user on the r/xkcd thread (https://www.reddit.com/r/xkcd/comments/b84at1/xkcd_2131_emojidome_script_src2131comicjs/) claims to have attempted "vote stuffing via the console" with no noticeable change in vote totals. So it looks like it may be sending it client-side, but only counting the vote once server-side --l

Just few minutes ago there was message in "fun facts" that you can click multiple times, although it's not counted if you click too many times (or something like that). I guess that vote stuffing was too much. -- Hkmaly (talk) 22:34, 1 April 2019 (UTC)

It's clearly live because the result of a previous round is affecting the next round's commentary - and the combinatorial explosion would prohibit that from being remotely plausible. We're watching live comedy here! SteveBaker (talk) 19:30, 1 April 2019 (UTC)
On the dog vs. wolf, he said "Again, we are getting a lot of questions on this today. This is live commentary, folks." Proof I guess. HI RANDALL! 172.68.189.241 19:31, 1 April 2019 (UTC)

Perhaps not "live" as each round 2 matchup was known 160 minutes before it was voted on. He could comment on the battle itself, and/or provide a comment if one or the other combatant won. I think he's a couple hours ahead of us.

I dunno. Whenever a new battle starts, there is a default message, that is soon replaced by a more pertinent message. That seems to suggest that he's doing it on the fly. 9yz (talk) 20:03, 1 April 2019 (UTC)

If that's live, Randall, and if you see this, give us a shout-out as proof. -Brent

Just because it says it's live, doesn't mean that it really is. It's also possible that the actual clicks are being ignored and the reported numbers are all pre-generated. Much less likely than that it's actually counting and Randall is inserting commentary live (with default messages when he doesn't), but possible. -- Bobson (talk) 12:50, 2 April 2019 (UTC)

It seems to be he overwrote round_3.png with round_4.png (at least its the same picture)

"Emoji" or "emojis" as the plural?

Due to the nature of the Japanese language, "emoji" is technically both the plural and the singular - however, the improper form "emojis" is used more as a plural frequently nowadays among English speakers. Which form should this explanation use? --Youforgotthisthing (talk) 22:27, 1 April 2019 (UTC)

The "friends in Australia" comment was made during the last round's wink vs upside down smile battle. This is probably a pun on how Australia is on the other side of the world from America; I don't think Randall was seriously saying he witnessed an influx of Australians inbound. 108.162.219.82 00:47, 2 April 2019 (UTC)

What would happen if any of the fights resulted in a draw? (same number of votes for both)

Given the # of matchups, it's not actually that unlikely.

We should try to test this. Gotta keep Randall on his feet!

Pretty sure one early on resulted in a tie.

Is Birthday Cake vs. Cupcake the draw referenced at the end of the "How it worked" section? Can we please have names added to all the emoji in the explanation text; I have never found a way to blow up emoji to a visible size, so frequently find I can't see them clearly enough to identify them, and in that bit at the end of "How it worked", the first one isn't rendering on my computer anyway. I'm guessing that the other is the birthday cake; really, I have come to hate emoji because they are so tiny. At least Randall made them nice and big on the voting screens. Yngvadottir (talk) 18:27, 2 April 2019 (UTC)

I had assumed that the "score" was a not simple count of vote clicks - I'd imagine (especially with all the autoclicking etc) that the raw votes would be gigantic numbers. So it could be that these were not draws when calculated to full precision - just that the API was only sending out a rounded number?

Having an emoji font is required to see emoji displayed on sites such as http://srv-01.valo.media/ . If anybody else is looking for a way to display these, there's a good free emoji font available here: https://github.com/eosrei/twemoji-color-font It includes a script to replace the default Windows emoji fonts to get them to display properly on windows. Unfortunately it's only black-and-white in chrome. If anybody knows any better options, please let me know!

I'm on Android here & many of the emoji do not show up. Notably, this includes the hedgehog, which... is not in the emoji set of any of my Android devices. Could somebody please add the emoji names next to their pictograms, where they appear the explanation? ProphetZarquon (talk) 04:16, 3 April 2019 (UTC)

I've written a script that pulls the commentary history and transforms it into a wiki table. It's up to date as of right now, and I'll run it again in the morning and one last time after the final round. If you have formatting suggestions, just put them here and I'll incorporate it when I regenerate the table. -- Bobson (talk) 04:58, 2 April 2019 (UTC)

Wonderful, thank you! Could you perhaps make the winner bold (or underlined like in the comic)? -Andy

I concur: that is highly suspicious. Fortunately, nothing of importance is at stake here, even if you were really pulling for the octopus. At this moment, we're ±10 minutes into bee vs pineapple and nothing comparable has happened. It may be an isolated incident. 162.158.106.144 05:50, 2 April 2019 (UTC)

For the violin vs the curling stone ('classical vs house'), the stone was ahead, but in the last four minutes I spammed my discord server to vote and we just got it over the line. - fudgeforlife

How sure are we the voting is real

I'm no expert at all, but it there any way that the websites that shows the number of votes live etc. can test whether these votes are real, or something Randall has pre-programmed? Not that I would not believe he was willing to stay up for the duration of this day, but it is an April Fools' Day comic, so he is completely "allowed" to have decided him self who should win all matched and have made up the commentaries in advance. Yes it would take along time, but not longer than doing it on the fly. It could just be that joke on us, that our votes does nothing and we just see how Randall has decided the dome should end. Can anyone go in to this, and explain why it is as it is either way (for sure made up, for sure real or uncertain if real or fake)? (PS I dislike these sections in the commentaries, but there are already 6...) --Kynde (talk) 12:27, 2 April 2019 (UTC)

Which picture should we use for the comic

The current picture shown is not relevant. That is only shown to web crawlers that pick new images up. Does anyone have a picture of the very first match? Not sure that is relevant either. Anything in between could be used. like this: 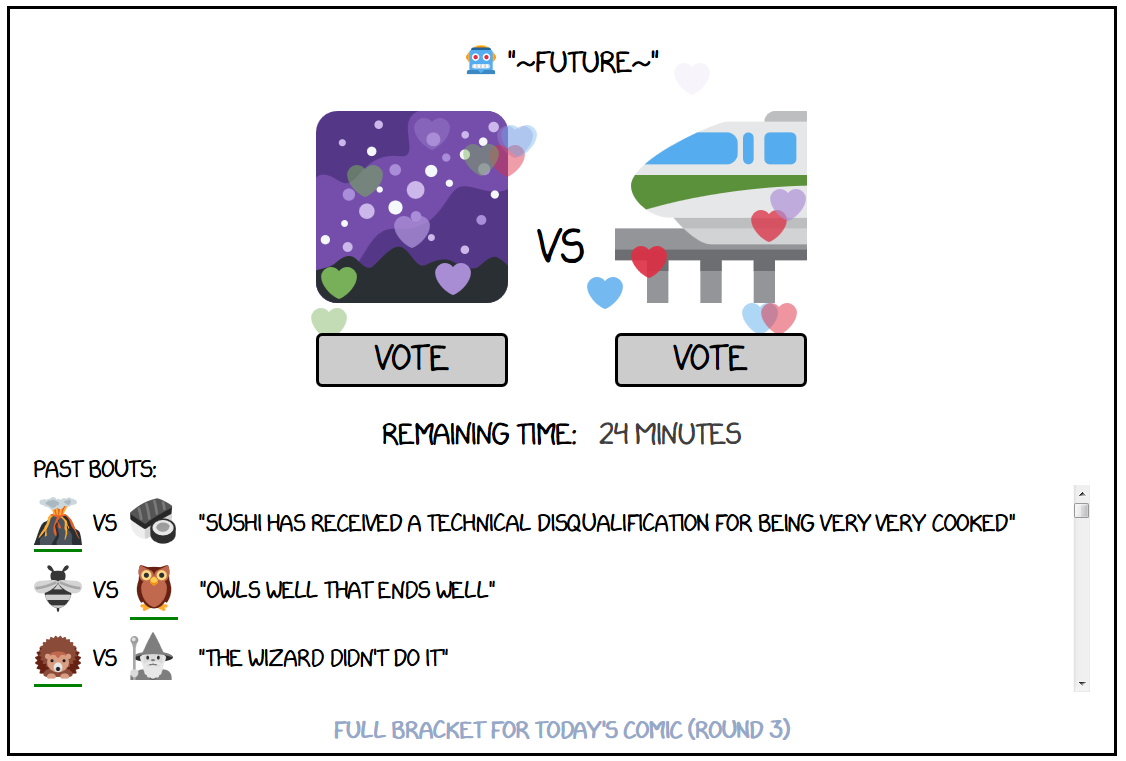 I added the current picture originally as a temporary solution since the bot didn't upload one. No one commented on the image so I kept it though I considered using something like this: 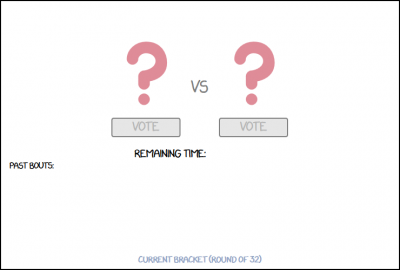 Right now, for me at least, the comic shows this image with the hover-text "Thank you to the xkcd April 1st volunteers/commentators, including @Chromakode, Kevin, @Aiiane, Patrick, Kat, Reuven, @cotrone, @bstaffin, @zigdon, schwal, Stereo, and everyone who voted!" Just another option, though that image doesn't explain the comic set-out during the competition. 172.68.133.84 19:12, 2 April 2019 (UTC)

Yes for sure we should use that now. I should have thought of that. Can see it has already been uploaded, but it takes long time, hours, from these pictures have been changed to the change can be seen ion the site. I have no idea why, but have experienced it several times, so later today the final picture should be ready. --Kynde (talk) 18:17, 2 April 2019 (UTC)

Great, I also added it to the transcript section and transcribed the dynamic part of the image. As well as the final image, which is not on-line and added the error image we had to begin at the bottom of the transcript and kept that transcript as well. Tanscript is more or less done I think.--Kynde (talk) 21:29, 2 April 2019 (UTC)

References and jokes in the commentary

Should we start explaining some of the robot announcer's commentary lines? Some of them are clear references to things. For example, the "Kickpuncher vs. Punchkicker" line is a reference to Community (Kickpuncher is a character in an in-universe film series, and Punchkicker is one of the characters' OC based on it.)

Maybe make extra pages like has been done for several of the previous years huge comics, especially April Fools' comics. And yes it would be interesting to explain them... But that is a huge job. --Kynde (talk) 13:17, 2 April 2019 (UTC)

Yeah - stars is currently duelling volcano - but the bracket shows that stars was eliminated by monorail. This kinda suggests that the bracket is being manually generated! SteveBaker (talk) 13:59, 2 April 2019 (UTC)

Many of the rounds were incredibly close - even the final was won by just a couple of percent. It was rare for there to be an overwhelming majority on either side. But it's incredible that 1,393,048 votes were cast in the final...given that all those people had to be there over just the 26 minute voting timeslot. I presume explainxkcd was taken down by overwhelming traffic? SteveBaker (talk) 16:44, 2 April 2019 (UTC)

March Madness is under way, he has referenced this before, it is in the explanation. Do not post at the top but at the bottom, for continuity. I moved your post down here where it belonged --Kynde (talk) 21:27, 2 April 2019 (UTC)