Explain xkcd: It's 'cause you're dumb.
(Redirected from Title text)
Jump to: navigation, search

The title text is an HTML attribute Randall puts on almost every xkcd image which normally adds something tangentially relevant to the topic of the comic. In some of the early comics, the title text was used to explain the joke (see, for example, 5: Blown apart). It can be accessed by hovering the mouse pointer over the image on the main site, or by clicking the Alt Text button near the comic title on the mobile site (m.xkcd.com).

Randall uses the 'title' attribute rather than the 'alt' attribute in the HTML sources (cf. Wikipedia's entry on "Alt text"). Accessing the comics feed and api data, the 'alt' text is labeled at 'alt'. [[1]] [[2]]

When using a device that cannot display the title text, it can be found in the Transcript on xkcd. 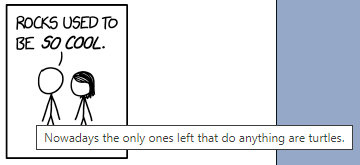