Can we kill imagesize, please? We almost never use it, and we have alternatives, like using the smaller "thumbnails" that you click through on the xkcd site as the images that we store. It'll let us link the image to the xkcd site too. Davidy22(talk) 01:29, 27 November 2012 (UTC)

I just had a massive brainwave. We don't actually need to include imagesize if we're going to leave it empty. Since it's a named option we can specify any order of options, and omit those we don't need to use. I'm going to edit {{create}} (if I can figure it out to not include imagesize so it will just be an advanced user's option. Hopefully that will make you smile, in these dull days of spam fighting. lcarsos_a (talk) 22:15, 5 December 2012 (UTC)

I had some spare time today so I went and made a modified version of this template that can handle undefined numbers such as in Radiation. Only catch is that it needs two other variables to be defined to keep the link valid... But I think that's a fair compromise to take another page off the incomplete explanations category. It could also allow for the addition of pages about the not-so-subtle jokes etc. in the what if series. The updated versions are over at a page in my userspace and its talk page. Pixali 02:07, 4 March 2015 (UTC)

XKCD has supported https for a while, it might be a good idea to switch the generated links to https.

Bad choice for the "displayed name" of this ["titletext"] field[edit]

As a general rule, I DO like the idea of using the same character string, that is the name of a certain field in a given template, as the "displayed name" -- that is, what the user sees when the value of that field is being displayed.

However, in this case, the field that is [now] called the "titletext" field, is an exception to that general rule.

The "titletext" field is used to show (and maybe also to help "explain"?) the contents of a little pop-up with some "caption" or other text, that appears when one "hovers" his mouse over a certain XKCD cartoon.

I do not know why the field name "titletext" was chosen.

Some might even want to suggest, changing the spelling of the field name "titletext".

That might be ("also") an interesting debate ... but that is outside the scope of "my" comment today.

IMHO the character string "titletext" -- or even "title text" [two words] -- would NOT be a good choice for the "display name" of the field that is used for the contents of that little pop-up with some text that appears (it "pops up") when one "hovers" his mouse over a certain XKCD cartoon.

This field (called "titletext") might sometimes be short ... but not very often. For the most recent XKCD I looked at, it (the pop-up "upon mouse hovering" text) contained MORE text than the entire XKCD cartoon over which my mouse was "hovering" when it [the value of this field] was being displayed as a pop-up. (Including dialog, "if any".)

So, I don't know what the "displayed name" of this ["titletext"] field should be. Nominations would be welcomed. But, IMHO, I do not vote for displaying it as [something like] "title text". IMHO, that is worse than [just] "unhelpful" ... it is actually confusing.

The template could link to the HTTPS version of xkcd. It seems like this was requested before, but reverted.

Also, while you're at it, the "www." in the link is superfluous and could also be removed.

I don't know why it was reverted, but I think this is a minor issue because every http request is always redirected to a secure connection. This means I will change it back to https. But because I'm an old fashioned guy and we are using the WorldWideWeb the www remains. --Dgbrt (talk) 18:44, 19 September 2018 (UTC)

I would propose that the text of each of the "buttons" be put in a style where word-wrap is disabled. As is, on my smaller screens, the back button always word-wraps between the "|" and the "<". I believe adding a style attribute with "white-space: nowrap" to each item of the unordered list (<li>) would fix this.

Alternatively, adding the style attribute it to the whole list (<ol>) would keep the whole thing from word-wrapping. -- Previous comment was by User:Trlkly

Yup, this would also fix this bug: 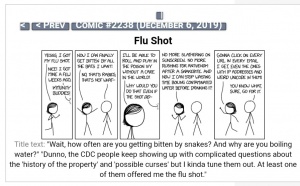