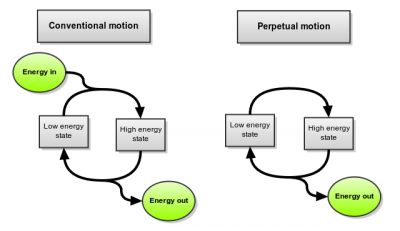 It should be obvious how perpetual motion doesn't work.

A conspiracy theory called Free energy suppression asserts that it really is possible to get infinite energy and special interest groups have worked to hide it. In the comic, Randall says that he posted to a forum dedicated to the idea back in 2004, and the thread is still active — it kept on going forever, like the perpetual motion machine they desire (in contrast with real attempts to build such a machine, which all stop quite soon). Of course, the reason the thread continues is that its advocates continue to add energy to it, in the form of comments. "Hot air", if you will.

The second law of thermodynamics states that the entropy of an isolated system never decreases. See this video about entropy. Thus, even if you could build a perpetual motion machine, you wouldn't be able to use it to produce energy that could be consumed by another device.

Furthermore, the avatar being used by the second poster is that of a power strip plugged into itself, which is often jokingly thought of as a perpetual motion machine.

[A page from a very long thread on "FREE Energy ~Forum~."]
Thread: You're all crackpots who don't understand thermodynamics.
[A bar above the comments:] Page 547 of 547 <<First <Prev 1 2 3... 545 546 547
Poster 1 [Default face icon]: No, idiot, only the north end of a magnet increases entropy. The south end decreases it.
Poster 2 [Power strip plugged into itself icon]: I wiki'd this "First Law" and I don't see the issue. My device isn't a robot and doesn't harm humans.
Poster 3 [Person with a large structure behind them icon]: What if we trick the government into only suppressing the left side of the flywheel?
Ironically, the argument I started on a perpetual motion forum in 2004 shows no signs of slowing down.

The explanation for the third post should make note of the situation where you hang a flywheel (e.g. a bicycle wheel) by each end of its axis using cords, spin the wheel then cut one cord, and the bicycle wheel will keep spinning in the same position! There was a YouTube video for this, but I cannot find it, there must be more people who know what I'm talking about. It has something to do with centripetal (No, Mr. Bond, I expect you to die). :) 84.224.77.100 05:32, 29 January 2013 (UTC)

I did some digging and found http://www.physicsforums.com/showthread.php?t=29697&page=4 Not sure if it has any relation, but it's hard to believe its a coincidence that the thread is from 2004 and the final comment is "I think this thread has run its course, and I'm getting tired of deleting crackpot posts from it. Any objections? Good." Ornj (talk) 09:36, 29 January 2013 (UTC)

Can anyone identify the icons at the left of the three postings in the comic? The first looks to be a generic head, but the second is a device of some kind, with (perhaps) a push-button, and a wire leading from and connecting back to the device. The third might be a person standing next to a Tesla coil or Van de Graaff generator. Vere Nekoninda (talk) 14:42, 31 January 2013 (UTC)

The second device is a power strip plugged into itself. Free energy, after all.

Perpetual Motion Machines are not free energy. For that to happen, you need it to output more energy than it uses :( SilverMagpie (talk) 16:53, 22 May 2017 (UTC)

Alright I have no problem with giving a link to rational wiki but can someone explain to me why we are redirecting people there when it has significantly less credible citations than wikipedia's pseudoscience page?--Lackadaisical (talk) 20:29, 7 November 2013 (UTC)

Pretty sure that, while literally true in the sense that no perpetual motion machine exists and therefore has never run for any length of time, that's not what Randall meant: I'm sure he meant the total time any attempted perpetual motion machine has run may be in the weeks and months but not the many years since he started the argument. I will edit in 24 hours if nobody objects. AmbroseChapel (talk) 00:50, 1 September 2017 (UTC)