This comic depicts an entry from a dictionary written in the far future (at least the year 2384 based on the textual reference). The entry gives the definition of the word "etymonline" and makes it clear that this word has simply supplanted the word "etymology" in the intervening centuries.

It references the internet service known as Etymonline, or the Online Etymology Dictionary, and implies that Etymonline as a source became synonymous with the concept of etymology.

The caption to the comic states that it is ironic that the popularity of Etymonline eventually caused the loss of the word "etymology" from English. Perhaps Etymonline grew into such a comprehensive and reputable source that it deserved the all-encompassing identification with the concept of etymology (through metonymy); or it simply gained such ubiquity and market dominance that it became, to all intents and purposes, the only service people used to meet their etymological needs and popular usage abandoned the original term in favor of the name for the tool associated with learning a word's origin. All we know is that the brief etymology given in the entry cites "modification" of a more archaic English form (the one we are familiar with), without any mention of the digital resource. This is a mild failure on the part of the dictionary entry, since the suffix "online" should at least have been noted as the modifier resulting in the current form. Perhaps a discussion of the specific internet service was not relevant in the entry, or the very concept of "online" has been so superseded by whatever its successors or usurpers might have become that it was lost to common, or indeed academic, knowledge.

The entry about etymonline uses, as an example of the use of the word, a quote regarding the etymology (etymonline) for the word Blimp. This example is a quote from a book from the year 2384 called Jovian Blimps: a History, dating the definition entry as being from some time after that work was published. It also states that, by that year, the word blimp no longer refers to a kind of airship still used on Earth (at the actual time of this comic's release) but instead to "Sky-cities" floating in the atmosphere of Jupiter. Although it is still known that Blimp was once used for Earth airships, while presuming that the reader is overwhelmingly aware of the Jovian examples.

The title text plays with this (replacing "etymologist" with the derived term "etymonlinguist"). Following on from the fictional citation's assertion that the origin for those historic airships being called Blimps is unknown, we get a comment from some present-day scholar (directed to the author of the futuristic entry) clarifying what they know about the etymology of the word "blimp". It references two theories of the etymology: that it is simply onomatopoeia; or that it was constructed from the phrase "Type B - Limp". It rejects the latter as a folk etymology, i.e. a back-formation, consistent with the explanation on Wiktionary and the Etymology section on the Blimp article upon Wikipedia. It is interesting to note that the current Etymonline entry only lists the B-Limp origin and does not mention onomatopoeia at all, though it does at least acknowledge that the origin is "obscure".

Already, a day after the release of this comic, the words mentioned in here trended on Etymonline, see more in the trivia section below.

[A picture of a dictionary definition that is askew in the frame to imply that it is printed or written on physical paper rather than a digital resource.]

etymonline (n) et・y・mon・line /,ɛt.əmɒn'lain/ The history and derivation of a word. Altered form of English etymology, from Old French ethimologie, from Latin etymologia. Quotation: "Before it came to refer to Jupiter's sky-cities, the term 'blimp' was used for 20th century Earth airships, but its etymonline before that is unknown." –Jovian Blimps: A History (2384)

[Caption below comic:]
Ironically, the popularity of Etymonline eventually caused the loss of the word "etymology" from English. 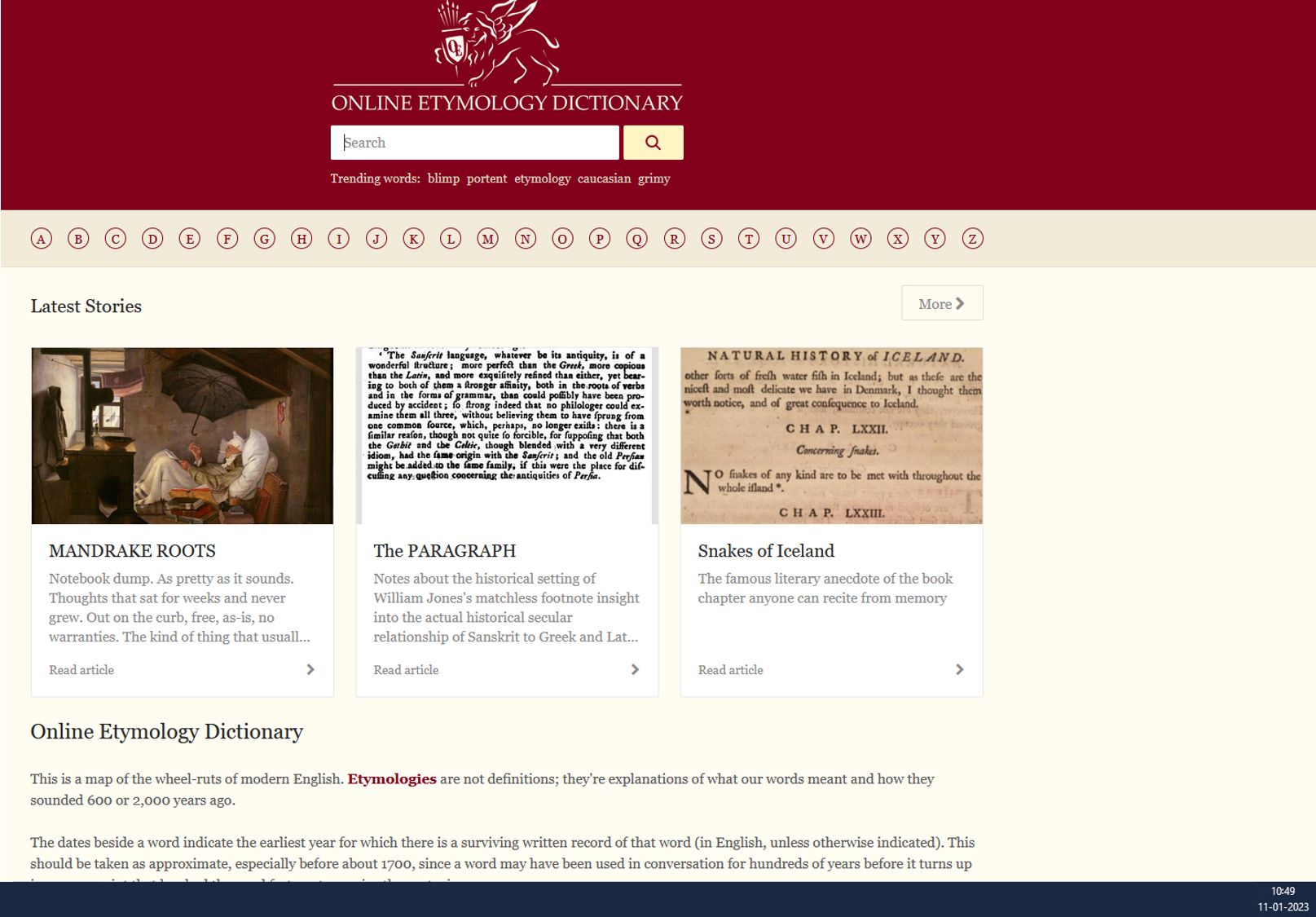 Random fact: I recently finished reading etymonline.com from beginning to end. It taught me things about the English language that I didn't know that I didn't know. Darthpoppins (talk) 00:46, 10 January 2023 (UTC)

I was JUST coming here to complain about that, LOL! I can easily change the image (not sure about in wikicode, I mean an actual image), but on my computer, I'm out and only have my iPad right now. On iPad Safari, the entire page zooms out in order to show all of that picture, so all the explanation is tiny. Personally, I would crop the picture to the relevant area (why do people need to see the articles listed beneath? Just show the search bar with the top terms and enough of the page to show what site). NiceGuy1 (talk) 06:02, 21 January 2023 (UTC)

I believe it uses "etymology" since that comment is from the perspective of some "present day" scholar, or Randall himself Dextrous Fred (talk) 05:32, 11 January 2023 (UTC)

What? No mention of the irony that an organization whose purpose is to preserve the history of words has accidentally done the opposite--supplanting and obscuring the word for the very thing they are trying to do?

(Documenting and) preserving the history of words is not the same as preserving words in their current usage. Hence providing a service that becomes so ubiquitous that its name supplants the previous word used to refer to the science on which that service is based is not in opposition to the service's aim of compiling a systematic collection of etymonlinear explanations. Indeed, it is an example of the changes in language absent which the science of etymonline would simply not exist. But I agree it's a bit ironic.

But was the Explanation Tag writer a cunning etymonlinguist? These Are Not The Comments You Are Looking For (talk) 04:56, 16 January 2023 (UTC)

Regarding the "how did future people miss the 'online' in 'etymonline'?" paragraph: My thought (influenced by "etymonlinguist") was that the word had been reanalysed as being derived from etymon, perhaps etymon + line (as in a line of descent). But there's no direct evidence to support this in the comic itself. Does this seem plausible to anyone else? And would it be of use in the explanation, to temper the sense of "these future lexicographers are idiots" that it currently conveys? -- Peregrine (talk) 17:01, 29 January 2023 (UTC)