Randall parodies several real-world breakfast cereals (which typically consist solely of grains and sweet flavorings) by creating versions that contain meat (animal products). The cereals that appear to be parodied (clockwise from top-left) include Froot Loops, Rice Krispies, Honey Bunches of Oats, Apple Jacks, Frosted Flakes, and Cheerios. There does not appear to be a deeper meaning to this comic than that.

The Scrapple Jacks parody (the only slightly obscure reference) appears to be made with scrapple, which, according to Wikipedia, is a mush of pork scraps and trimmings combined with cornmeal and wheat flour, often buckwheat flour, and spices. Real Apple Jacks ran an ad campaign in the 1980s and 1990s in which an adult or authority figure tasted the cereal and declared "these don't taste like apples!", thus missing the point of why kids liked the cereal. The slogan is parodied on the Scrapple Jacks box. Randall referenced this same slogan again in "38: Apple Jacks".

The title text, reading, "Disgusting.", apparently reflects Randall's opinion of his own creation. 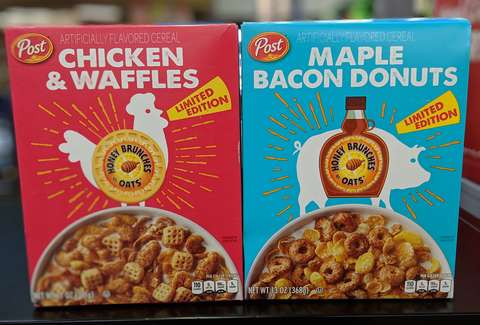 The best bite we like is the one that combines different textures: chewy, soft, and crunchy. When you get them all in one bite, that's called dynamic contrast.

To get dynamic contrast, follow these steps to eat cereal: 1- Fill your bowl halfway, and add milk. 2- Let it sit until it just starts to soften. 3- Then sprinkle a little dry cereal on top, and start eating. 4- Combine the softer and crunchier bits in each bite. 5- Add more dry cereal as you need it to maintain your perfect ratio of soft to crunchy.