Explain xkcd: It's 'cause you're dumb.
(Redirected from 758)
Jump to: navigation, search 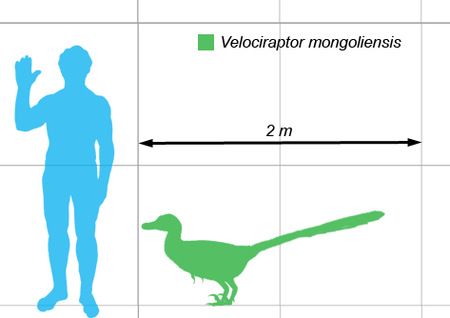 Velociraptors were only about 50 centimeters in height. (from Wikimedia Commons) 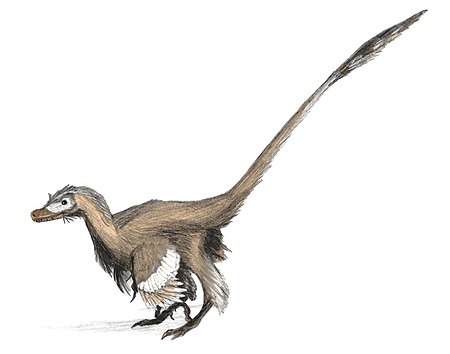 Artist's impression of a feathered velociraptor (from Wikimedia Commons)

In the film Jurassic Park, the protagonists are menaced (some fatally) by carnivorous dinosaurs, including very large velociraptors, which are a genus of dromaeosaurid. In this film, the dinosaurs had been recreated via the sampling of ancient DNA recovered, primarily, from the stomachs of mosquitoes trapped in amber (fossilized tree sap).

Cueball is holding a lit cigarette, recalling the role of chain-smoking John "Ray" Arnold, the Chief Engineer of Jurassic Park, played by Samuel L. Jackson. He is reporting that the (veloci)raptors have escaped from their enclosure, but nobody seems overly concerned by this; they do not represent a danger. Apparently, the fear of being hunted by dinosaurs is greatly reduced if they have been genetically engineered to be small enough to gather up with a broom and dustpan.

Note that while growth is dependent on genes, it is extremely unlikely that any kind of genetic manipulation could reduce an animal in size by the factor of approximately 10,000 that is implied here. However, it is perhaps no less unlikely than being able to recreate the dinosaurs at all in the first place. People seem ready to ascribe almost limitless powers to DNA and genetic engineering, but there are many practical constraints.

The title text suggests that even very small dinosaurs could be terrifying to some, if they imagined a huge number of them. The author would be pleased if this were the case.

[Cueball checks a computer terminal while a friend is running off in the opposite direction.]
Cueball: The raptor fences are down. They're loose.
Friend: I'll get a broom and dustpan.

Jurassic Park got a lot less scary when the researchers discovered they could activate the gene for extreme dwarfism.

Is the Cueball on the left holding a lit cigar? -- ‎Gegueure (talk) (please sign your comments with ~~~~)

Does this remind you to Gulliver being attacked by tiny people in Liliput? Or the similar scene in Perry Bible Fellowships strip 95: Gnome Bubbles with the tiny gnomes? B jonas (talk) 23:35, 1 November 2013 (UTC)

The raptor in the film might actually be Utah raptor which is as big as in the film and had no evident of feather.198.41.238.40

The picture of the feathered velociraptor seems to be partially cutting into the Discussion section, any fix? --Youforgotthisthing (talk) 00:29, 9 February 2019 (UTC)

That appears to be a bug in the page template itself, and thus beyond my editing capabilities. The problem seems to happen when a column of illustrations is longer than the article text. Nitpicking (talk) 12:44, 4 September 2021 (UTC)

Activation of the dwarfism gene may also be a reference to the "activation" of the Lysine contingency in the movie; the raptors were bred with a genetic defect - missing the ability to produce Lysine - that could be used as a means of controlling escaped animals. The dwarfism gene activation seems like just another way of controlling the population in an exigent circumstance.

It might be easier to just grab the original from Wikimedia Commons and upload it here. The license should allow. Nitpicking (talk) 22:47, 2 February 2022 (UTC)