A much larger version is available at http://xkcd.com/832_large/. 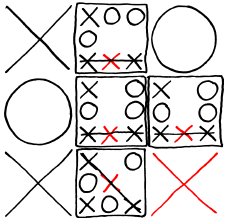 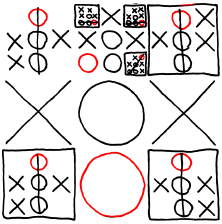 9) In Map for O, there are four further "strategy" mistakes, when the O player could have won the game but doesn't. These can be found on:

The squares for X2 and X3 should be:

respectively. The same on three other symmetrical games to the above.

where [] are the fourth-level nested panels, but should be:

Could someone please explain how to read the comic?[edit]

What would happen if BOTH players used the chart?[edit]

Every game would go like this: (it makes sense in edit)