Explain xkcd: It's 'cause you're dumb.
(Redirected from 1523)
Jump to: navigation, search

Amazon Prime Air is a conceptual drone-based delivery system currently in development by Amazon.com. While on one level he thinks the idea is cool, Cueball worries about living in a sci-fi dystopia, with those drones flying all around him, tracking his actions, etc. In the third panel, Megan suggests sending a message to Congress, suggesting a law for making the stealing of drones legal. This would alleviate the problem of drones flying around everywhere because if they did people would catch them to use for themselves. In the final panel Megan begins to search for butterfly nets so they are ready to catch the microdrones when the law to make it legal to steal the drones goes through.

This tactic may not work as well as planned; drones will likely simply fly higher or employ other security measures since there are no regulations on drone behavior.

The title text suggests one of five things:

Amazon drones is also the subject of the title text in 1625: Substitutions 2 and there are two quadcopters over the volcano lake in 1608: Hoverboard. Also, Cueball is abducted by seemly sentient drones in 1630: Quadcopter.

[Cueball is standing behind Megan who sits at a desk typing on her laptop.]
Cueball: So how do we regulate all these micro drones?
Cueball: I mean, Amazon delivery bots sound cool...

[Cueball stands alone surrounded by three micro drones.]
Cueball: But I worry that overnight we'll realize we're surrounded by these things, no one will know who's controlling them, and then bam, sci-fi dystopia.

[Megan turns in her chair towards Cueball.]
Megan: If you wanna slow it down, why not just remove all regulations, but then make drone theft legal?

[Cueball takes his hand to his chin and Megan turns back to type on the laptop.]
Cueball: ...I like that.
Megan: You write to congress.
Megan: I'll stock up on butterfly nets.

I know people shoot them out of the air with guns and considering the height at which they're flying, it's possible. The Twenty-second. The Not So Only. The Nathan/Nk22 (talk) 12:47, 11 May 2015 (UTC)

I think the Amazon bit is implying that Amazon is artificially making drone nets unavailable because of its own drone based delivery service. Feel free to rephrase it. 108.162.219.193 (talk) (please sign your comments with ~~~~)

does this reference P.K,Dick's "Vulcan's Hammer"? -- Docski (talk) (please sign your comments with ~~~~)

But if there's no regulations, who cares about what's on your property and what isn't? I'd be sending out my drones to catch more drones rather than try running around waving a net. Not to mention that while drones might be unregulated, drone nets might still be. Pixali (talk|contribs) 23:25, 12 May 2015 (UTC)

How easy is it to take over the remote controller once you have the drone in your net? Is there a fairly generic way to pair a drone to another controller? (In current designs) Taibhse (talk) 22:20, 11 May 2015 (UTC)

Shouldn't be too hard, so far all technology is hackable, only thing that stops us from hacking most hardware (drm) are the laws blocking the technology required to do so. As long as no only drone theft, but also drone hacking is legal, this might actually be more effective than expected at keeping drones out of our every-day life. Then again, a wild west for drones might make most practical uses for drones impossible, but hugely favour for example spy-drones, that cant be stolen because they aren't found. Dorus (talk) 11:28, 12 May 2015 (UTC)

Does this have anything to do with 1243 ? I mean it suggest largely the same thing just on a different scale

That might be it. Especially that title text: 'It's going in A collection of satellites skewered with pins and mounted in display boxes.' The Twenty-second. The Not So Only. The Nathan/Nk22 (talk) 16:59, 12 May 2015 (UTC)

I deleted this explanation.

Alternatively, the title text could be interpreted to mean that the drones have already become self aware, and are incorrectly listing the nets as out of stock to prevent their capture.

Moreover, this is, if not a humor site per se, at least a site with a habit of deadpan humor building upon the essential humor of the comics. Furthermore, the anonymous use of unfounded ad hominem attacks to subtract such humor makes one sound like a meanyhead spoilsport. Despairbear (talk)

The problem: Unidentified drones. The solution: No regulations, legal to steal. The outcome: Drone manufactures will incorporate DRM inside each drone making it their interest to be identified. Problem solved. 141.101.99.11 06:20, 13 May 2015 (UTC)

What is the present legal situation with trespassing drones? Can property owners just take them? Do they need to hand them into the police? 108.162.249.172 (talk) (please sign your comments with ~~~~)

I removed this picture link from the explain because we don't have a valid copyright for this picture: 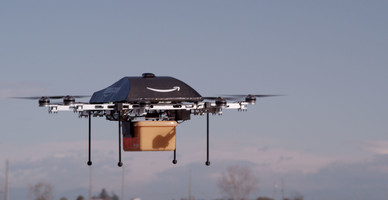