This whole comic, including the title text, are a play on the then-popular internet meme "This Looks Shopped." It may also be making fun of how everything and anything you find on the internet has someone insisting that it's 'fake' or 'photoshopped', regardless of whether it's true in actuality.

Adobe Photoshop is a popular image manipulation tool. It is used to manipulate photographic images and for drawing. Of course, Photoshop and similar tools like Paint Shop Pro can only be used for imagery, not for real life objects.

The title text contains the second part of the internet meme, the complete text of which is: "THIS LOOKS SHOPPED / I CAN TELL FROM SOME OF THE PIXELS AND FROM SEEING QUITE A FEW SHOPS IN MY TIME."

Quite a few interesting images have been uncovered as "shopped" using various techniques. Some examples: shadows are in the wrong direction, extra hands appear, movie stars are made thinner, wrinkles or spots are removed, and objects are added or removed. This of course triggered the start of the meme.

JPEG is an image compression algorithm that works by finding frequencies in blocks of 8x8 pixels and saving that instead of the original pixels. This works remarkably well, but sometimes leaves artifacts that can be seen when zooming in enough. The iris of an eye contains all kinds of odd colored spots - and there's not a JPEG algorithm in sight.

This is another strip in the My Hobby series. 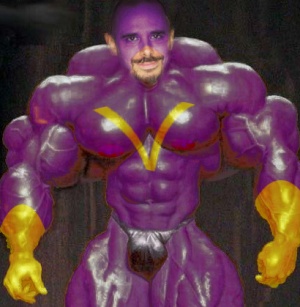