This is an accidentally published "five-minute comic" by Randall that was released as an oversight by the Management of the xkcd website, then was permanently cached by one of the unofficial xkcd browsers for Android, instead of the correct comic 940: Oversight. Interestingly, it contains an early version of 942: Juggling, which was published less than a week after this comic, thus indicating that this is indeed a true unpublished Randall comic.

Randall had originally posted three of these five minutes comics during one week in November 2010 almost a year before this one was released by mistake. Here is thus a complete list of all four comics in the entire Five-minute comics series:

Here is a list with explanations for each of the small comics:

[A man facing left is at home plate ready to bat for 3 panels.]
[A man facing right is holding a tennis racket and a tennis ball.]
[The two men stand facing each other.]
[A scoreboard is shown:]
HOME:00 VISITOR:00

[Cueball is standing on a platform, holding a microphone. Megan is behind a podium, a game show contestant.]
Cueball: Welcome back to our show, Are You Sluttier Than A Fifth Grader?
Megan: I hope to God the answer is "yes."

[A mosque stands at the edge of a town.]
Voice: Submission deadline is 5:00 PM December THIIIIIIIIRD!
Caption: The Muslim call for papers

[A little girl (Dorothy) is running away from a tornado.]
Dorothy: Auntie Em! Auntie Em!

[Megan is pointing angrily towards her floor lamp, which has poop in it.]
Megan: !!!
Cueball: Look - the fact of the matter is that evolution has not prepared humans to handle the decision of whether or not to poop in your floor lamp.

[The other man turns on a flashlight.]
Flashlight: click

[Two children walk up a hill.]
Narration: Jack and Jill went up a hill

[A well at the top of the hill.]
Narration: To fetch a pail of water.

[A man on a horse with a sword holding a flag that is mostly obscured.]
Narration: Alas, that hill was San Juan Hill,

[A cavalry charging. The rest of the flag is revealed and has Rough Riders written on the it.]
Narration: And gruesome was the slaughter.
Flag: Rough Riders

[The panel shows a close up of Cueball reading a book. The book is called "How To Juggle" and has a picture of a person juggling on the cover.]

[The view now shows the entirety of Cueball. A book is on the floor behind them, and he is holding some juggling balls.]

[Cueball throws the juggling balls in the air.]

[He lowers his arms to prepare to catch the balls. The balls are still hovering in mid-air.]

[Cueball now stands with his arms by his sides. The balls have not moved and are still suspended in mid-air.]

[Cueball scratches his head and stares at the still floating juggling balls.]

[Cueball throws the book into a trash can.] 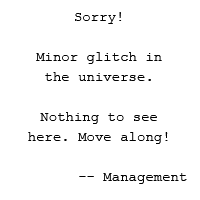 Sorry!
Minor glitch in the universe.
Nothing to see here. Move along!
--Management

How is this unpublished? Although only through an app, this comic has still been issued for distribution to the public, therefore, by definition, published. Forrest (talk)14:41, 29 December 2015 (UTC)

Thanks for the great explanation (also by but not just by Forrest). I found the link to it from the explanation for 940, and though we really lacked this page. As I did not know all the info I just called it unpublished. And then I actually hoped that someone would explain this comic, and you all did, and it is a great work. Especially finding out why it is here etc. Thanks :-) And great that it was saved because some of them are really funny --Kynde (talk) 21:06, 3 June 2016 (UTC)

I just wanted to add that the forum post about this comic notes that this comic was accidentally posted by the site admins for xkcd, then later replaced with the current version of the comic, i.e. 940: Oversight. The direct image URL for this comic now points to this image. Thus, the comic was not published through the unofficial xkcd app or anything like that; the more likely scenario is that the app downloaded the comic when it became available and cached it, so when the comic was replaced with 940: Oversight, the app did not update it. 03:58, 7 January 2016 (UTC)