Megan is explaining the evolutionary phenomenon of mimicry of female insects which fools male insects into trying to mate with the flower (pseudocopulation). This causes the pollen of the flower to stick to the male bee, who may make the same mistake with another flower, allowing for pollination.

This particular orchid mimicked the solitary bee Eucera, which now only pollinates it in the Mediterranean (the bee isn't really extinct yet). This may eventually lead to the extinction of the orchid due to lack of reproduction. In most areas where it grows, the orchid is using a method of self-pollination, which can be detrimental to the genetic vitality of the species as it is a form of in-breeding. 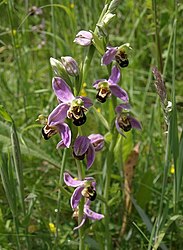 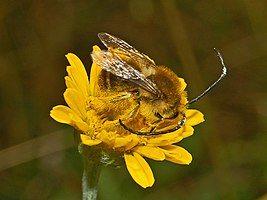 In a similar way, some plants depend on animal species now extinct, but as the dependency was not about pollination but about spreading seeds across the land, those plant species can still last millions of years after the animal species extinction. For instance, it’s the case of the avocado.

The title text culminates this theme by invoking the idea that some day human beings will, likewise, be extinct, and aliens will be able to learn about us through the distorted and faded representations of ourselves that we leave behind - Axe commercials which, like the orchid, present an idealized form to deceptively attract mates. We are left to speculate whether these aliens will be able to construct, somehow, through three levels of indirectness (the human representation, the orchid's representation and the male bee's perception) any memory of the female Eucera, and, if so, how distorted a view of the bee it will be.

[Beret Guy and Megan are walking through a wood.]
Megan: There are these orchids whose flowers look like female bees. When males try to mate with them, they transfer pollen.
[Megan kneels next to a flower.]
Megan: This orchid - Ophrys Apifera - makes flowers, but no bees land on them because the bee it mimics went extinct long ago.
[Megan stands.]
Megan: Without its partner, the orchid has resorted to self-pollinating, a last-ditch genetic strategy that only delays the inevitable. Nothing of the bee remains, but we know it existed from the shape of this flower.
[They walk on past the flower.]
Megan: It's an idea of what the female bee looked like to the male bee...
Megan: ...as interpreted by a plant.
Beret Guy: Wow, so...
[We see a full-colour painting of an orchid flower. It has purple-pink petals on a mottled grey background, along with the bee-like parts. It's quite a realistic painting.]
...the only memory of the bee is a painting by a dying flower.
[The flower is alone in a panel.]
[Beret Guy walks back on screen.]
[Beret Guy kneels down next to it.]
Beret Guy: I'll remember your bee, orchid. I'll remember you.
[Beret Guy walks off-panel again.]

First! The act of telling someone not to jinx something causes the jinx you're trying to prevent. gijobarts (talk) 07:02, 2 September 2013 (UTC)

I had thought all the worker bees were female, and all the male "drones" stayed in the hives. The Wikipedia says that isn't true for all species. gijobarts (talk) 07:15, 2 September 2013 (UTC)

Eusociality in bees is actually quite rare. Only the honey bee and a few other species are social, the rest are solitary: one nest per female and males that fly around without nesting and are often quite active. It's the common case, social species are the exception.

Wikipedia on the reproduction of Ophrys apifera:

It is the only species of the genus Ophrys which preferentially practice self-pollination. The flowers are almost exclusively self-pollinating in the northern ranges of the plant's distribution, but pollination by the solitary bee Eucera occurs in the Mediterranean area. In this case the plant attracts these insects by producing a scent that mimics the scent of the female bee. In addition, the lip acts as a decoy as the male bee confuses it with a female. Pollen transfer occurs during the ensuing pseudocopulation.
Bees in the past have promoted the evolution of bee orchids. Male bees, over many generations of cumulative orchid evolution, have built up the bee-like shape through trying to copulate with flowers, and hence carrying pollen.

A colony of ophrys apifera was discovered a few months ago.(Spanish). Probably not related.
This page (Vietnamese) has an excellent photo of an ophrys apifera, along with other strange-looking plants. You can see how it looks like bees in that photo. gijobarts (talk) 07:50, 2 September 2013 (UTC)

Was there once another bee that pollinated it in more areas, or did the eucera once populate more of the world, or has the flower expanded where the bee has not followed? gijobarts (talk) 08:47, 2 September 2013 (UTC)

Eucera is common all over Europe. But only the Southern bees recognize the plant. It may be the northern plants started selecting for a different bee that went extinct, or Eucera got ahead of the arms race in Europe or that self-pollination is more effective for now or some other reason entirely. 96.251.85.48 15:41, 2 September 2013 (UTC)

The Axe body spray gag is particularly relevant, since the ad's depiction of a woman, like the flower, is another imitation of real females of a species meant to draw males of the species through deception. Nick Douglas (talk) 17:50, 2 September 2013 (UTC)

Note that (as doubtless mentioned in the linked-to Wikipedia article, "Axe" is known as "Lynx" in the UK (at least). The same style of marketing campaign, however, with the partially homogonised Anglo-American (or even Worldwide) cultural references fighting it out with local variations in sensibilities and advertising law/regulation. Meaning that besides alternate product-shots and (sometimes) voiceovers, they do tend to have similar/identical action composition in their ads.

Also, self-pollination is being described as "a form of in-breeding". I think making that "the ultimate form of in-breeding", or similar, would be more accurate. In-breeding generally is used to describe more marginal or "just beyond the limit" forms of incests (e.g. close cousins, in human cultures), up until sibling or parent/child genetic re-mixing, but only full parthenogenisis seems to be more 'extreme' (although arguably less dangerous, through its long-time 'practice', rather than being a step back from the more beneficial sexual reproduction methods that the self-fertilising organism generally will have had to make, like in this case). 178.106.190.241 23:29, 2 September 2013 (UTC)

I noticed that there are a number of sub-species of Ophrys apifera. Is it possible that they are regionally adapted to variations among the Eucera population? Randall has gone to a lot of trouble to depict the flower and to wax poetically upon the bee, and it seems somewhat odd if the whole point of the comic, that the bee is 'extinct', is a fallacy. Is Randall just making use of his poetic license here? Or does the Ophrys apifera that he depicts relate to an actually extinct sub-species of Eucera? I would love to know, but without going to the trouble of finding out for myself. 108.162.219.223 02:22, 8 January 2014 (UTC)

The italian language edition of Wikipedia also mentions that Ophrys apifera relied on a now-extinct bee. Source is given as The Blind Watchmaker, by Richard Dawkins. Maybe Dawkins used the example without knowing that there are still some bees which pollinate this orchid in some parts of the world. And maybe Randall was reading Dawkins. Does anyone have this book?
--Lou Crazy (talk) 13:57, 10 September 2015 (UTC)