This comic has a larger version available.

The map divides America's Atlantic coastline into regions according to the worst hurricane that has hit each area in the last century, based on data from the North Atlantic hurricane database (HURDAT) to determine the severity and the National Centers for Enrvironmental Prediction's (NCEP) rainfall to determine where the hurricane was present. Most of the hurricanes are listed by their US reporting names, with hurricanes before 1953 (the year when the current naming system was established) being listed by their year and sometimes a sequence number or city name.

The title text is a joke in light of this bleak humor, saying that finding residents in each of the regions who are old enough to have been alive through all of these is quite a daunting task. In principle, this would be the only way to confirm the "worst hurricane in living memory," and may be taken as a riposte to anyone who wishes to argue this map: "If you think there was a worse one, find a 105 year old resident who agrees!" 105 was likely chosen because most people can only remember back to an age when they were 5, so someone would have needed to be 5 years old to remember a hurricane in any detail 100 years later.

Hurricanes and especially their names have been featured before in comics 453: Upcoming Hurricanes, 944: Hurricane Names and 1126: Epsilon and Zeta.

A full list of North Atlantic hurricanes after Tropical cyclone naming was introduced can be found here.

Anyone In Your Town Remembers?
Estimated from Hurdat Database and NCEP rainfall totals
1914-2014
[A map of the east coast of the United States as far southwest as the Texas/Mexico border, as far northeast as the Maine/Canada border, and as far inland as Kentucky. The map has coastal regions blocked out with the name and year of the worst hurricane in the last 100 years.] 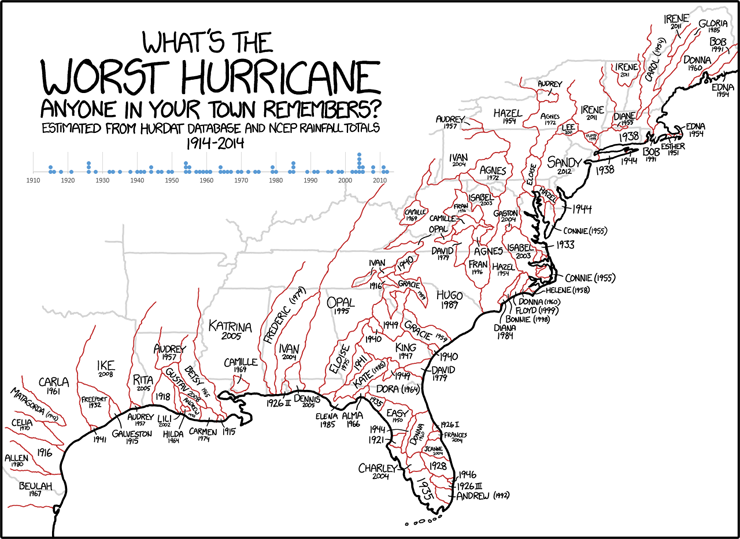 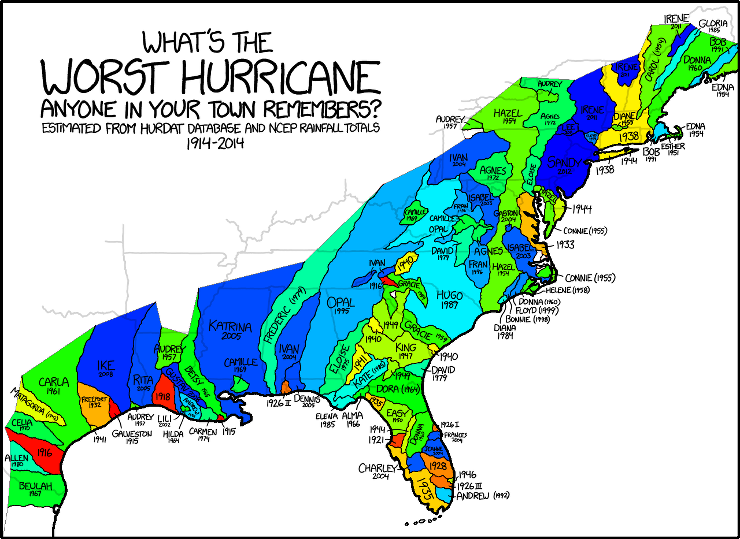