Most people are familiar with three phases of water — solid (ice), liquid (water), and gas (vapour) — and with the fact that an increase in temperature will cause water to change from one state to another. The gas and liquid phases are quite straightforward; however, there is in fact not one single solid phase of water, but a variety of numbered phases ("ice I" through "ice XVI" are currently recognized), several of which are divided into sub-categories. Ordinary, everyday ice is known as "ice Ih" ("ice one-h"). Most of the more unusual forms of ice only form under very high pressure.

Randall's phase diagram starts out realistically, though slightly simplified in several ways. For one, it simply uses the name "ice" for the usual form(s). It is focused in on a narrower area than the more complete diagram linked earlier; on that version, the "ice V" region is quite small, and "ice III" is barely visible, whereas both are quite plain to see on Randall's diagram. Lastly, where most phase diagrams have pressure increase upwards, Randall has the pressure scale increase downwards, this has been chosen to make it possible for the jokes to appear at the bottom of the chart. Else the comic would not be funny for the average reader.

Because, as the diagram continues downwards and the pressure increases, the jokes begin. Beyond the moderately high-pressure forms of ice (ice II, III and V), a real phase diagram has ice VI; Randall has "Vanilla Ice (ice VI)". Vanilla Ice is the stage name of a white rap/hip-hop artist from the 1990s; the initials of Vanilla Ice, and the Roman numeral six, are both VI.

Vanilla Ice's biggest hit, "Ice Ice Baby", used samples from the earlier song "Under Pressure", by David Bowie and Queen; accordingly, on Randall's diagram, the "Vanilla Ice" region transitions to "David Bowie & Queen" when it is under (even higher) pressure.

Further references to "Ice Ice Baby" are found in the title text. Near the beginning of the song, Vanilla Ice raps the line, "All right stop, collaborate and listen". The unusual choice of "collaborate" in this line has made it memorable, and the word is used in the title text (in a more typical context). The phrase "survive at room temperature for several months" is likely a reference to "Ice Ice Baby" being Vanilla Ice's only major hit, humorously suggesting he faded out of the public view after a few months of fame. Finally, even the word "sample" may be deliberately chosen as a reference to the sampling of "Under Pressure". "Ice Ice Baby" was written in 1983, but in 1990 Vanilla Ice finally admitted that he used unmodified samples from "Under Pressure" and paid royalties to Queen and Bowie. 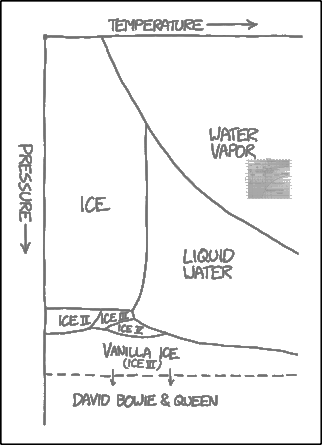 The original comic, with a lower contrast, showing the real phase diagram for water from Wikipedia

When originally published, another image was faintly visible just below and to the right of the "Water vapor" label. It appeared to be a copy of an actual phase diagram for water from Wikipedia. The image has since been removed, lending support to speculation that it was an error (perhaps an image Randall referred to in drawing the comic, but accidentally left in the final result). Alternatively, it may have been deliberate—suggestions include its presence being a watermark, or a reference to the "Full text of the Wikipedia article on pareidolia" joke in the 1551: Pluto comic.

Randall has referenced "Ice Ice Baby" and "Under Pressure", separately and together, on many previous occasions, notably in 159: Boombox and 210: 90's Flowchart. The gag of having the performers of "Under Pressure" also being literally under pressure was also used in 1040: Lakes and Oceans.

The what if? that was current at the time of this comic's publication was 138: Jupiter Submarine, which began with an even more fanciful phase diagram: that of a submarine. It also contains a reference to the songs "Under Pressure" and "Ice Ice Baby" in one figure, and "Can't Touch This" by M.C. Hammer in the title text of that figure (which generated similar controversy for sampling "Superfreak" by Rick James).

The title text of 1434: Where Do Birds Go whimsically suggests another possible phase of water/ice.

As mentioned above, the small image on the original version could be a reference to the "Full text of the Wikipedia article on pareidolia" joke in the 1551: Pluto comic.

[A phase diagram is shown with eight labeled regions.]

[The horizontal axis, increasing in value to the right is labeled:]
Temperature

[The vertical axis, increasing in value downwards is labeled:]
Pressure

[Region alongside the "Pressure" axis covering about half of its length is labeled:]
Ice

[Region below "Water vapor" and to the right of "Ice" is labeled:]
Liquid water

[Three small regions below "Ice" are going from left to right on the same pressure region, the last ending just under "Liquid water". They are each labeled:]
Ice II
Ice III
Ice V

[Below "Vanilla Ice" there is a dashed line with two arrows pointing downwards. The region below the dashed line is labeled:]
David Bowie & Queen

It looks like a tiny version of the same graph, but flipped upright so that pressure increases as you go up. (Doing this in the main strip would ruin the "Under Pressure" joke. --Druid816 (talk) 05:19, 7 August 2015 (UTC)

I'm not happy with the title-text-explanation. In my eyes the joke is that Randall try to make us believe that Vanilla-icecream is ice IV – and they somehow managed in the 90s to let it exists at high temperatures (for us: normal room temp). --DaB. (talk) 11:31, 7 August 2015 (UTC)

I have to disagree for one important reason: (Vanilla) Icecream was produced in high quantities since approx. the 1950's (or even earlier) and not just since the 90's, which is common sense, I think. Imho "Vanilla Ice was produced in small quantities for years" refers more to the fact, that many of Vanilla Ice's tracks consist of different samples of earlier produced songs (such as Under Pressure) or even complete covers (i.e. Play that funky Music). However, Randall might have missed another perfect opportunity for a different joke: Since "Vanilla" is used as expression for "normal" or "trivial" he could have placed it for Ice (I), the "normal" solid water. In that case the Under Pressure reference would have been a bit less obvious, though. Elektrizikekswerk (talk) 12:22, 7 August 2015 (UTC)

Purely as a tangent, ice cream was commonly available in the U.S. in the 1700's, and by the 1800's large silver flatware sets often included (along with other odd specialty pieces like asparagus tongs) sets of ice cream forks. Yes, ice cream was originally "properly" eaten with a fork. Miamiclay (talk) 20:40, 7 August 2015 (UTC)

Surely this comic would have been a perfect opportunity to mention Kurt Vonnegut's fictional Ice-nine? Disappointed in you Randall! Cosmogoblin (talk) 09:42, 7 August 2015 (UTC)

I agree that Vonnegut's ice-nine is a wonderful topic, but since it exists (fictionally) at room temperature and pressure, it complicates this piece. --Tanana (talk) 22:33, 10 August 2015 (UTC)

I have to very strongly disagree with the opinion expressed by 108.162.216.173 in this edit, namely that 'pressure scale incresing down isn't so jokes are at bottom, it facilitates being "Under" Pressure - the joke doesn't work any other way.' Being at the bottom along the pressure axis doesn't mean that region is "under" pressure. It's "under" Vanilla Ice. The joke works because it is under pressure, a very high amount of pressure, not because it is geometrically below pressure in any sense (it really isn't). My original text, that pressure increases downwards so the jokes are at the bottom, makes far more sense to me (well, naturally). It's the "reveal". If the jokes were at the top, they'd be read before the average reader had even grasped what the comic was about. But anyway, that's just my opinion; does anyone else have any thoughts? -- Peregrine (talk) 15:07, 7 August 2015 (UTC)

I totally agree with you and have reverted to something similar to the original version. Maybe it could be worded better, but at least that makes sense. --Kynde (talk) 20:15, 8 August 2015 (UTC)
As the editor who changed the wording obviously I disagree. If the axis were arranged correctly the linkage to "Under Pressure" would be far less obvious. ("Over" pressure??!?) I get what you're saying that 'under' pressure has nothing to do with geometry, but it does work typographic arrangement. But I have to question why the reveal is naturally the right assumption, as it would still work just as well with the 'reveal' at the top... maybe it's just kismet. But then again, I think the speculation is overthought in the first place - it's also just as natural that Ice Ice Baby is built on top of Under Pressure - and I've already invested too much time in it. Just MVHO. 108.162.216.173 19:32, 11 August 2015 (UTC)

And here I thought it was somehow referencing this http://news.discovery.com/tech/biotechnology/this-ice-cream-doesnt-melt-150831.htm "This Ice Cream Doesn't Melt" Xyzdragon (talk) 19:12, 8 September 2015 (UTC)

"U Can't Touch This" does not also sample "Under Pressure", it samples "Superfreak". The connection between the two is just that they caused similar controversies at about the same time. As soon as I can come up with good wording, I'll edit the explanation. 162.158.255.52 18:06, 28 September 2015 (UTC)