This comic marks the second year of Randall Munroe's wife's battle with cancer, and appears to depict actual events from those two years. Randall is depicted as Cueball and his wife as Megan, as usual for both.

This comic later became part of a series of comics directly continued in 1928: Seven Years and later continued in 2386: Ten Years. The first eight panels of this comic are included in the next two, although slightly grayed out. 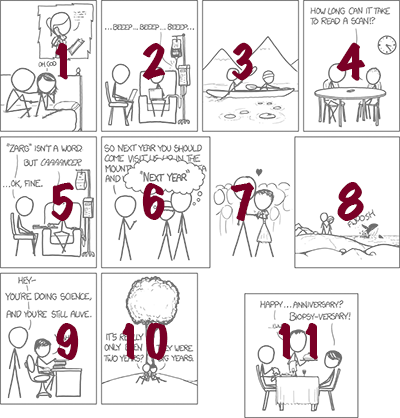 The title text is referring to a possible side-effect of chemotherapy drugs, the inability to concentrate. It could also just be the fact that the chemo can make you feel just terrible. When whatever effect kicks in, she loses the rest of their Scrabble games for that day. However, as we see in panel 5, there is a reason why she wins all of the first half of their games. But this is not enough, or she even forgets to play on the cancer, when the drugs take effect.

The use of the asterisk in the title text for "*dominated*" might be a reference to the 1999 game Unreal Tournament in which the game announcer voice would from time to time use the words "dominating" or "dominated" in a deep tone when a player is doing really well in the game (for example being on a multi-kill strike). Example sound here.

Knit caps have only been used a few times in xkcd, most prominently on Knit Cap Girl in 1350: Lorenz, see her section for more details.

[Randall and Randall's wife (wearing a knit cap) stand on a beach, watching a whale jump out of water.]
Fwoosh

[Randall's wife is sitting at a desk with her laptop standing on top of two books. Her hair has grown back a little more. Randall stands behind her.]
Randall: Hey—
Randall: you're doing science,
Randall: and you're still alive.
Randall's wife: Yeah!

[Randall and Randall's wife sit under a tall tree on a hill.]
Randall: It's really only been two years?
Randall's wife: They were big years.

[Randall and Randall's wife sit at a table in a fancy restaurant. Her hair has grown back even more. The waiter (Hairy) brings them a dish with a cover on it.]
Waiter: Happy... Anniversary?
Randall's wife: Biopsy-versary!
Waiter: ...Eww.

While it is known that Randall's wife has since survived more than two years past the date of the invitation in Panel 6, it is unknown whether the invitation was later accepted. The followup comic Seven Years does not seem to include a visit "up in the mountains" among its various other recreational activities, but the one after it, Ten Years, does. However, since it is possible that the invitation was made up for the comic in order to represent the worry over any invitation envisioning the future at that time, it is possible that it was never proposed as depicted in the comic. Therefore, the real life invitation(s) which inspired the inclusion of Panel 6 in the comic could perhaps have referred in real life to an activity that is actually depicted in Seven Years or Ten Years, or to some other activity, which then may or may not have been realized.

There are no words to convey how awesome you guys are. Thank you.

Flip cancer. Lost my mother-in-law to it and now my dad is undergoing chemo for stage IV lung cancer.

Seconded. This strip hits close to home, even years after the fact. And given that of my parents and grandparents only one grandmother was not yet diagnosed with any type of cancer, both frequentist and Bayesian statisticians probably agree I should be cautious myself. 46.142.57.253 20:01, 30 November 2012 (UTC) madd

Did anyone else think the second to last panel was a couple who were sitting close to ground zero of a nuclear bomb? It took several glances to finally see a tree instead of a mushroom cloud. Sayno2quat (talk) 15:35, 30 November 2012 (UTC)

When I first saw that panel from my peripheral vision, I also thought it was a mushroom cloud.CityZen (talk) 17:46, 30 November 2012 (UTC)

Agreed; the mushroom cloud was my first impression, too. And I hazard the guess that it was intentional: it's an apt metaphor of how your world seems to explode... -- IronyChef (talk) 14:02, 1 December 2012 (UTC)

The language of referring to Randall's girlfriend as "wife" before they were married is awkward.CityZen (talk) 17:47, 30 November 2012 (UTC)

Ok, "partner" is slightly less awkward, but I think using "Cueball/Megan" instead of "Randall/Randall's partner" would be most consistent.CityZen (talk) 21:17, 30 November 2012 (UTC)

+1 on s/Randall/Cueball/g (and s/(girlfriend|partner|wife)/Megan/gi) with an explanation that the comic very likely depicts real-world events in Randall's and (real-world) Megan's life. Though it might be tributary to make the inferential leap, I think would be entirely "unscientific" to do so (which is so unRandall...) It also reinforces the notion that this happens to many, many more couples: Randall and Megan are not unique in what they are experiencing, though Randall does an excellent job of illustrating just what they're going through. (And yes, I could just go and change it myself, but wanted to discuss beforehand.) -- IronyChef (talk) 14:02, 1 December 2012 (UTC)

Wikis lack democracy. Somebody puts their foot down, and that's that. In any case, I think if someone is going to insist that these characters can only represent Randall and his wife Megan, it's odd and slightly disrespectful to never use her proper name.CityZen (talk) 01:29, 2 December 2012 (UTC)

Crying out about social injustice is the adult version of screaming "Ouch!" when a parent grabs a child's arm to get their attention. Democracy is not do-what-you-want-to. Democracy is having a discussion and then acting upon the results of that discussion. There have been many discussions about having Randall in comics. The result was that whenever Randall decides to place himself in a comic, that we should honor that. So, instead of using a generic character he put himself and his wife into the comic. So, we honor that. We do not know the name of his wife, Randall is a very private person, we respect his privacy and only go by the information he gives out, and we don't make wild speculations, this is why we don't refer to her by (any) name; it's the most respectful thing we can do.

To prevent vigilante edit warring I've locked the page. Now, if you think that the site should not recognize when Randall specifically puts himself in comics, then there is a reason to bring this discussion back to the table. lcarsos_a (talk) 05:45, 2 December 2012 (UTC)

I believe those other comic is rather general, where this particular one has enough set of facts that specific to Randall's case. That said, I agree with you that consistency is good, having the character called Cueball and Megan and explicitly said that those represent Randall and his wife probably better. Arifsaha (talk) 16:48, 7 December 2012 (UTC)

My two cents: As Arifsaha said, those other comics are general. Each is one scene demonstrating one situation or discussion, so Cueball/Megan could be any couple going through cancer treatments. In this case, quantity does matter in determining the significance of "evidence that this is Randall". There are so many scenes here that it's clear a very specific and personal story is being shared.
Also, the title text usually is from Randall's perspective (obviously there are exceptions, but when the text is realistic, it's a safe assumption). Here it says "she", not "my wife", indicating that the person being referenced has already been introduced (i.e. is in the comic). Further linking the Randall text with the characters is the fact that it directly references the panel 5 scene, rather than: "related ideas that are not in the comic" (933/996), simple objective explanation (931), or a reference to a previous strip (881). So unless you want to argue that the title text is intended to be Cueball addressing the readers and not Randall, it seems like this is all about Randall & his wife. - jerodast (talk) 16:06, 22 December 2012 (UTC)

Cueball and Megan do not represent Randall and his wife. Cueball and Megan are the everyman/woman (and usually not even that but the geekiest kind of every(wo)man). Now, if Randall were building a story arc that spanned 1000 comics I would believe that this was Cueball and Megan, in character, standing in for Randall's real life experience. But the fact is, Randall clearly marks when he intentionally has multiple comics that build directly upon each other, see Category:Comic series. If xkcd were a story driven web comic we'd have to point out that Cueball and Megan have been married several times, as well as been flirtatious with other characters, had children both in and out of wedlock. It's much more easily explained that this comic is Randall and his wife merely drawn "in the style of". Ignoring an unusually personal comic for the sake of consistent character naming seems absurd to me. lcarsos_a (talk) 17:50, 7 December 2012 (UTC)

Also there is an established precedent for Randall's appearance in comics - he appears as an unadorned stick figure in all of them, despite clearly being Randall. Just because he looks like Cueball doesn't mean we need to call Randall "Cueball but really he's Randall this time". If anything that's even more confusing. Randall and Cueball both appear in (different) comics, and they're drawn the same. I'm sure people can handle that. - jerodast (talk) 16:06, 22 December 2012 (UTC)

Sooo... Because the clipboard-holding character in the first panel is a woman, we assume she's a nurse instead of a doctor?

Seriously the clipboard-holding character is much more likely to be a doctor than a nurse if they are communicating actual results of medical tests.--71.251.30.68 03:58, 6 December 2012 (UTC)Anonymous

I agree, although, Randall went out of his way to draw a garment on her that has short sleeves, unlike a lab coat. However, doctors wear scrubs too. I'm changing it. - jerodast (talk) 15:22, 22 December 2012 (UTC)

Down at the bottom, there's a section that lists the categories this page is in. The Cancer category has been there since this page was created. Also, please add comments in chronological order. lcarsos_a (talk) 14:19, 11 December 2012 (UTC)

Since my mother has just made her 27th biopsy-versary, my sympathies, prayers and best hopes are with anyone who has won someone from, lost someone to, is fighting or is fighting with someone, any form of Cancer.

Which is, pretty much everyone; is this forum, with Randall in particular.

I do not know if this is a Scary Thought, but, in IV machines, a long beep repeating itself (for example, the 2nd panel here) means that either the IV machine had finished its infusion or there in an occlusion (which means that the flow from the bag to the vein was cut off somehow, a problem that can be inflicted by simply moving the tube in a way that bends or even folds the tube). If an occlusion occurs, a nurse would need to fix the problem (in my example case: re-'straighten' the tube) and very painfully push the fluid into the vein until the gap caused the occlusion disappears into the vein. Greyson (talk) 20:50, 15 April 2013 (UTC)