Randall's then girlfriend, now wife, was diagnosed with cancer in late 2010, a matter he has discussed in the comic multiple times before. Here, motivated by the seven-year period between the American solar eclipses of 2017 and 2024, we see them reminiscing the seven years prior to the first eclipse, leaving an open question to what the next seven years will bring.

This comic is part of a series of comics and directly continues 1141: Two Years, which is shown as the first eight panels, slightly grayed out. It later continued in 2386: Ten Years.

It was released as a response to another cancer diagnosis, this is explained in the Header text, which, for this comic only, has replaced the standard xkcd updates every Monday, Wednesday, and Friday. The header for this comic, with the active link included, is:

Becky Beaton, sister of fellow cartoonist Kate Beaton, has also been diagnosed with cancer. You can support her treatment here.

Kate Beaton is the creator of the web comic Hark! A Vagrant. Although this comic is not one on Randall's list of Comics I enjoy, he is clearly much influenced by another cancer diagnosis among someone in his own creative field. 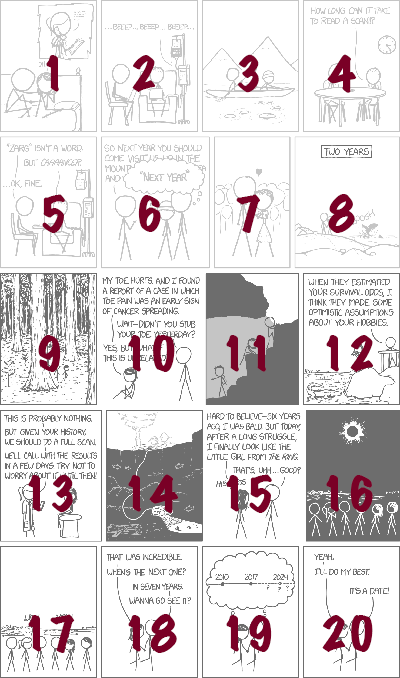 The title text is a continuation to panel 15 concerning the horror movie The Ring. Specifically, watching the videotape in The Ring is supposed to kill a person in seven days, but the title text instead says "seven years".

With all these thoughts in mind, there is no wonder that he wishes to participate in helping a colleague's cancer-stricken sister with the unique header text above this comic, as mentioned above.

[The first eight panels, used earlier in the comic 1141: Two Years, are faded out.]

[Randall and Randall's wife (wearing a knit cap) stand on a beach, watching a whale jump out of water. This is the last gray panel, with an additional label in normal black color.]
Fwoosh
Label: Two years

[Randall and Randall's wife (with her hair noticeably longer) are walking through a forest.]

[Randall's wife is sitting down, not in the forest anymore.]
Randall's wife: My toe hurts and I found a report of a case in which toe pain was an early sign of cancer spreading.
Randall: Wait—didn’t you stub your toe yesterday?
Randall's wife: Yes, but what if this is unrelated?

[Randall's wife stands on a rock above an alligator in a swamp, photographing the alligator. Randall is on a balcony behind safety railings.]
Randall: When they estimated your survival odds, I think they made some optimistic assumptions about your hobbies.

[Randall's wife sits on an examination bed, listening to a doctor holding a clipboard.]
Doctor: This is probably nothing.
Doctor: But given your history, we should do a full scan.
Doctor: We'll call with the results in a few days. Try not to worry about it until then!

[Randall and his wife stand above a deep pond full of fish and other objects. Randall's wife is piloting a wired underwater camera with lights.]

[Randall and his wife are standing next to each other. Randall's wife has shoulder-length hair covering most of her face.]
Randall's wife: Hard to believe—six years ago, I was bald. But today, after a long struggle, I finally look like the little girl from The Ring.
Randall: That's, uhh... good?
Randall's wife: Hissssss

[A line of six people, including Randall and his wife, stand and watch the solar eclipse.]

[The sky has been brightened.]
Ponytail: Wow.
Randall's wife: Yeah.

I don't want to take away anything from this very moving comic, but he does realize there's an eclipse or two every year, somewhere on the planet? Does the fear of cancer somehow limit them from ever leaving the US?

First off this is fantastic. As someone in the same situation, at the same part of the timeline, this rings so honest and true. The tree scene ... brilliant. Walking among beings for who a human lifespan is insignificant. Second. a hearty, contemptuous, giant F you to Joshupetersen. I can't stand conspiratorial know it alls like you. You think people in this situation don't know every single treatment that is out there? Every single immunotherapy drug in Cuba, every single clinical trial being run out of some backwater lab in China? There is no big pharma conspiracy. There is however a conspiracy called "evolution," which after several million years of practice ensures that cancer is one of the wiliest, most resilient killers out there. 172.68.47.30 22:26, 14 December 2017 (UTC)Kaeleku

The way you speak about evolution suggest cancer is some kind of infectious organism which evolved to kill effectively. It isn't and it isn't infectious at all. Even the kind of cancers caused by infections are not DIRECT result of infections. Cancer is basically failure of normal cell functionality, abnormal growth of your own cells which your self-repair mechanisms failed to prevent, and evolution is the reason why it's rare to have cancer before the age when it's natural to have children.

Nevertheless, there is no reason for conspiracy: large companies are just slower to adapt to changes. Radiology and chemotherapy are tested, immuno-oncology is new, not well tested and may not work on all kinds of cancer. And regarding how aggressive those old methods are, think about dentistry, which instead of curing anything limits itself to effectively amputation and replacement by artificial prosthesis. -- Hkmaly (talk) 02:52, 15 December 2017 (UTC)

The wrongest thing to do in this regard is to think of "cancer" as one disease. Yes, the suffering aspect of various forms can be similar and it is sometimes useful to lump them together when making broad policy decisions. But just about every organ and cell type presents a unique challenge, which is best dealt with differently. Some cancers are extremely chemo- and radiosensitive, others are rather resistant. The same is true for novel and experimental treatment methods. Do your own research by all means, but if your oncologist strongly recommends one treatment option, consider that they are weighing previous outcomes of available treatment methods before making the suggestion. --Nialpxe, 2017. (Arguments welcome)

I feel it important to point out to anyone who may be looking at here and thinking about dealing with cancer... talk with your trusted health care professional who knows your case, and is not only well aware of but well practiced in modern medicine. 162.158.74.9 23:58, 14 December 2017 (UTC)

In 931: Lanes his friends asks if they are "out of the woods". Maybe that's what panel 9 is all about? They are still in danger and therefor "into the woods"?

Two years, here. Really meaningful, this one. Thanks.