Explain xkcd: It's 'cause you're dumb.
You have a new message (last change).
Jump to: navigation, search 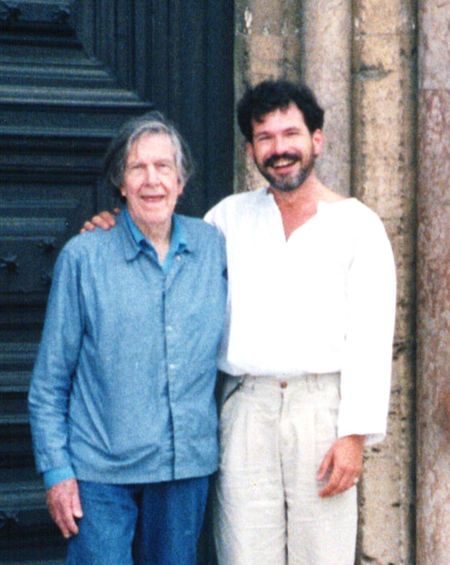 4'33" is a 1952 composition by American avant-garde composer John Cage consisting of four minutes and thirty-three seconds of silence. More specifically, 4'33" consists entirely of faint ambient sounds coming from the environment, while all the players silently hold their instruments. The noise of the audience is considered part of the composition. It is Cage's most famous work, and the subject of many music jokes. Note that John Cage wrote plenty of other non-silent things.

Megan is using an app on her smartphone that analyzes music that is playing and uses an online database to figure out what it is; popular real-world examples include Shazam and SoundHound. She does this in an empty room, correctly matching 4'33". Cueball attempted to use the same app in 1192: Humming, but Megan hacked it there.

[Megan is walking with a phone in her hand.]

[Megan is in an empty room.]
Phone: Listening...

Besides, 4'33" was not meant for anechoic chambers, Cage specifically talks about all the "sound and music" going on while the piano player is "doing nothing". 4'33" is separated into 3 parts, in which the piano player is also supposed to open and close the piano. --Pnariyoshi (talk) 14:22, 15 April 2013 (UTC)

There is a controversy whether 4′33″ (4 mins 33 secs) was the intended duration. The original manuscript is lost, the first performance lasted 4′33″ (and there is a transcript of it with the exact duration of each movement shown), and later editions only show three movements “tacet”. Cage himself said (though much later), “the work may be performed by any instrumentalist or combination of instrumentalists and last any length of time”. --77.186.113.21 14:30, 15 April 2013 (UTC)

Perhaps the alt text is being overanalyzed. Is it not more likely to be just a sarcastic comment that all music is coincidental ambient noise interfering with the silence? MegsyS (talk) 14:43, 15 April 2013 (UTC)

I read it as more a semantic middle-ground between the (current) main explanation and yours. Instead of 'making all music have Cage's work "embedded" into it.', it means that 'all music(1) is Cage's work with someone else playing (other) music inside it, ambiently'. (1 - Any given four minutes and thirty-three seconds of music, that is. Whether that includes a subset of the longer 'embedded' piece, a superset of a a shorter embedded piece or a dislocated translation/truncation of shared 'sound space'. IYSWIM. YMMV.) 31.109.25.88 17:30, 15 April 2013 (UTC)

Really, we get it, reality is artistic. That doesn't mean you have some deeper understanding of it. It just means you made a basic observation. Observational =/= Creative. And art requiring an artist requires creativity. Art without an artist is reality. And you can't take credit for reality. 108.162.216.114 20:10, 4 December 2014 (UTC)

I strongly disagree that the environment has to be a recording studio for the statement in the title text to be true. It could be any situation in which a band is playing. I will edit in 24 hours if nobody objects. AmbroseChapel (talk) 00:29, 31 August 2017 (UTC)