This comic presents Randall's idea for a line of food products all with clear black font on a white background. The products with black block lettering and white background stand out from the other items in this comic. The irony is that even though the branding isn't terribly creative, the lack of complexity is what causes the products to stand out. These product packaging styles resemble no-frills products and generic brands. For example, in Canada, the "No Name" generic brand of low-cost products sold by Loblaws general features a plain yellow label with the description of the product in bold black text, and occasionally an image of the product. The brand name is minimalized as are other legally-required elements (e.g. the weight of the product). Another of Loblaws' generic brands, President's Choice (PC) currently has a plain white background with black bold text for the labels on most of its products (usually with an image of the product as well as the brand name), although more recently, text in accent colors has been introduced.

The style of packaging might be a reference to The Prisoner TV series from the '60s, a dystopia set in a village (actually, "the village") locked out from the outside world. The shops here only sell "village food". See this photo for an example. It might also be a reference to Portal’s bean cans.

In the title text, the lack of a listed URL relates to the lack of branding on the package. It is possible that omitting the URL the consumer's curiosity will be aroused, and they will spend time on the internet hunting for the actual site. 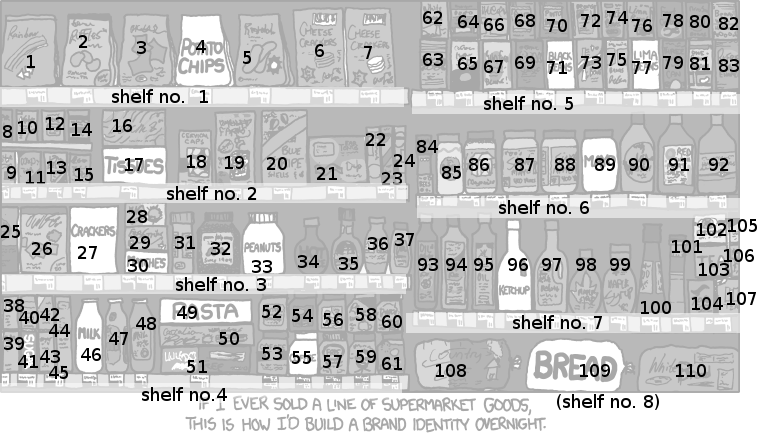 [The incredibly varied shelf of a supermarket aisle. There are many different types of products on this shelf. Each type has numerous different brands, all surrounding a very plain brand that has, as its only label, the type of product. A plain bag, labeled in plain black letters, says "Potato Chips" and is surrounded by all the other various brands of potato chips. The same exists for tissues, crackers, matches, peanuts, hot sauce, sugar, milk, pasta, coffee, black beans, lima beans, mayo, ketchup, tea, and bread. There is a stark contrast between the incredibly noisy and complex labeling of every other brand and this simple one.]

[Caption below:]
If I ever sold a line of supermarket goods,
this is how I'd build a brand identity overnight.

While the sugar and hot sauce are unusual in that you can easily read the packaging, I don't think they are supposed to be in the same product range. --Pudder (talk) 16:25, 8 December 2014 (UTC)

There's a brand called "Ja!" from the Rewe group in Germany that uses this exact concept somewhat, but nowadays, the packages contain pictures and illustrations of all kinds, and aren't as white, simple and plain as they used to be in the past. See: http://www.rewe.de/besser-einkaufen/ja/produkte-und-infos.html --Rolfhub 23:25, 14 September 2013

"Ja!" is a very successful brand sold in Germany (and more countries) offered by REWE. The products are presented in a white cover, just showing the word "Ja!" ("Yes!" in English) and much smaller the content of the product. Maybe this could also be mentioned at the trivia section. --Dgbrt (talk) 21:55, 26 May 2014 (UTC)

About multiple brands looking the same. Contrary to "tragedy of the commons", "prisoners dilemma", or "what if everyone act like that" https://xkcd.com/958/ , this is not a problem. It would actually be approaching utopia. When people look for distinguishing features, they would have to, like, read the nutrition on the back, or look for comparison prices. I.e. relevant info, instead of "oh shiny". /David A 141.101.80.33 05:36, 24 August 2016 (UTC)

Soylent 2.0 is doing this exact thing: https://soylent-production-herokuapp-com.global.ssl.fastly.net/static/images/drink_secondary_messaging_block1.3571d250b954.jpg Interestingly, that image is very similar to this comic.03:36, 7 February 2016 (UTC)

The generic milk is in a plain glass or plastic container on the shelves of the grocery section of this store, not in the refrigerated cooler. Milk stocked in this location will spoil rapidly. Only aseptically packaged milk can sit on a warm shelf for extended periods without spoiling. These Are Not The Comments You Are Looking For (talk)

What product is [18]? If this contains, as I read, Cervical caps it makes no sense to sell them in a bulk pack as a cervical cap is a reusable contraceptive device. Or does it refer to soft tampons as menstrual management device? The latter would fit better to the picture, but not to the text... As I am from Germany, I am not familiar with the common products offered in a supermarket. Perhaps anyone can help? --LaVe (talk) 10:59, 24 February 2017 (UTC)

I agree - that *really* looks like it says "cervical caps". Perhaps he meant menstrual cups? They are similar in appearance, but for capturing blood flow, not for contraception. Some of them are intended for wash & re-use, but others are disposable from month-to-month, justifying the multi-pack. L-Space Traveler (talk) 22:02, 19 November 2022 (UTC)

I would buy clearly labeled "shampoo", "conditioner" etc. The ones sold in the stores where I live list the brand, the product effect, some slogans, what it contains or smells like, some more slogans, bottle volume etc. And in a tiny font somewhere between the lines, the actual product type. :( 108.162.241.178 23:56, 24 October 2017 (UTC)

Why are there so many unreadable ones? There could be Lays and stuff. Maybe Kleenex. But at least put more real brands. Or don't. StillNotOriginal 21:01, 20 May 2018 (UTC)

Public Goods seems to be the most recent high-profile company to adopt this kind of simplified black-on-white, one-choice-per-product labeling. Clearly this idea is as old as the hills. In fact, every single commodity product found on shelves in the Lascaux Caves is labeled just like this. Dvgrn (talk) 18:02, 30 August 2019 (UTC)

At the end of 00's, every major chain of convinience stores adopted the idea of "own brand", distinguishable as "outstandingly plain white box" (as seen in Moscow). It all started after Auchat got in Russia, offering "ridiculously" cheap stuff in white boxes with small illustrations and big black text on it. Merci beacoup, monseur Auchan.172.68.244.55 12:20, 31 December 2021 (UTC)