Welcome to the explain xkcd wiki!
We have an explanation for all 2495 xkcd comics, and only 39 (2%) are incomplete. Help us finish them!

Go to this comic explanation

This comic, like 1897: Self Driving, references the approach of using CAPTCHA inputs to solve problems, particularly those involving image classification that computers need to know how to solve. Specifically, it reflects reCAPTCHA v2's fallback puzzle which is based on identifying road features and vehicles. A reCAPTCHA puzzle might ask a user to "check all squares containing a STOP SIGN." in order to help train systems that must do it automatically.

This is actually a trick captcha. It asks to click on pictures of mines. There are no pictures of mines in the captcha, there are only numbers and empty fields. So this is trivially solvable by doing nothing and all this talk about Minesweeper solving below is moot but interesting to read nonetheless.

Minesweeper is a logic puzzle game where the player must uncover tiles in a grid by clicking on them. Some of the tiles contain "mines" such that revealing those means immediate defeat. When uncovering a tile without a mine it shows how many of the (up to 8) adjacent tiles contain a mine or, if the tile has no neighbouring mines, it automatically and recursively reveals every neighbouring tile as far as all numbered 'clue' tiles. By reference to the indications provided by those numbers, a player (optionally, but typically) will mark those that they identify in their efforts to succesfully reveal all unmined locations and win the game having tripped none of the mines.

This comic uses the game to create a CAPTCHA that ironically asks the user to "Click all the pictures of MINES", the opposite of the traditional goal, hence the title Mine Captcha.

This mine CAPTCHA might be considered awkward for a variety of reasons. Firstly, unlike image recognition, which is a natural biological and developmental skill, humans don't naturally learn the tricks needed to win at Minesweeper. It is a logic game being bundled with Microsoft Windows which provides little obvious instruction and often it was bored people launching the program who would start randomly clicking on squares unsure of what they are supposed to do. Those who perservere get to learn the tricks and traps, but not everyone will do that and thus also understand how to adequately solve the CAPTCHA.

Secondly, clicking on the squares that contain mines is the opposite of what you do in actual Minesweeper, and players who are sufficiently familiar with the game might get tripped up by muscle memory, putting you at a disadvantage no matter your skill level with the original game.

Thirdly, minesweeper involves a certain degree of luck. While logical skills are important, there are possible instances (increasingly so as the chosen difficulty level is increased) where the numbers do not provide adequate information to confidently assure it is in a single specific square, leaving even expert players to have to guess and hope they do not trip on one the more unlikely (but possible) final mines after a lot of other mental work done to successfully clear and confirm the rest of the map. If luck plays any part in the CAPTCHA, this would increase false negatives in human detection. (The implication of most logic pizzles is that the problem given to the user is of a state where only one possible solution exists as an answer, but the conceipt of this one is that the solution is not known by the puzzle-creator.)

Fourthly, solving a game of Minesweeper is usually (although not in this case) impossible without clicking more of the empty gray squares to reveal enough info to figure out which ones have mines on them.

Fifthly, a CAPTCHA is meant to be a challenge designed to be solvable by humans but not computers; Minesweeper would be easily solvable by an AI (assuming no ambiguity) as it is, at its core, a logic puzzle, and the squares are simple shapes with solid-color backgrounds and thus relatively easy for an AI to process.

Regarding the game itself, 6 of the 16 tiles hae a colored number, in blue for the three number ones, green for a single instance of two, and red for the two number threes. Given the current board configuration, one can deduce that there are four mines (in squares A2, B2, B3 and D3, where letters (numbers) mark columns (rows)), see trivia section. For example, there are two mines within the squares A2,B1,B2, as signified by the 2 in A1, but only one of those can be in B1 or B2 (because of the 1 in C1). Therefore, A2 has to be a mine.

Each number is shown in a different font and style. This follows a technique used in CAPTCHAs that display text in various styles, often distorted, and ask the user to type in the displayed characters.

The title text is similar to 1897: Self Driving where the CAPTCHA solver is asked to answer quickly, parodying the current tendency for CAPTCHAs to apparently be used as training data to teach AI how to correctly identify road hazards by instead suggesting the CAPTCHA offloads the task to a human instead. In this case the car is apparently driving into a minefield and can only avoid the mines if the user solves this CAPTCHA fast enough. Where the first would be plausible, although very dangerous, this time it hinges on ridiculous, as real minefields usually do not have large numbers indicating which of the surrounding land contains mines[citation needed].

[A 4 by 4 Minesweeper field, with some cells revealed with numbers. Each number is drawn in a different font/style.] 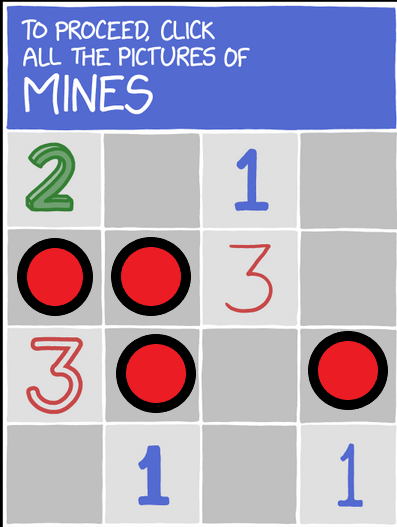 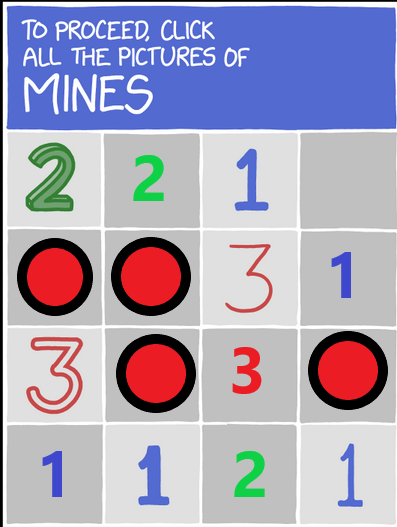 Is this out of date? Clicking here will fix that.

Lots of people contribute to make this wiki a success. Many of the recent contributors, listed above, have just joined. You can do it too! Create your account here.

You can read a brief introduction about this wiki at explain xkcd. Feel free to sign up for an account and contribute to the wiki! We need explanations for comics, characters, themes and everything in between. If it is referenced in an xkcd web comic, it should be here.

There are a lot of comics that don't have set-in-stone explanations; feel free to put multiple interpretations in the wiki page for each comic.

If you want to talk about a specific comic, use its discussion page.

Please only submit material directly related to (and helping everyone better understand) xkcd... and of course only submit material that can legally be posted (and freely edited). Off-topic or other inappropriate content is subject to removal or modification at admin discretion, and users who repeatedly post such content will be blocked.

If you need assistance from an admin, post a message to the Admin requests board.