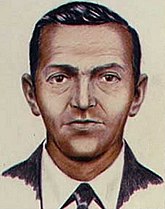 In 1971, a man referred to by the media as D. B. Cooper hijacked a Boeing 727 and escaped with $200,000 in ransom money (equivalent to $1,250,000 in 2020). Although $5,800 of that money was recovered in 1980, the only thing known about him are a police composite drawing (shown at the right) and the name "Dan Cooper" with which he had purchased his airline ticket. The name D. B. Cooper came about as a result of a miscommunication with the media. While the FBI maintains that Cooper was most likely killed when he parachuted from the plane, they have never determined his identity, and the investigation was called off in 2016, making it the United States' only unsolved plane hijacking.

The following 5 pages are in this category, out of 5 total.